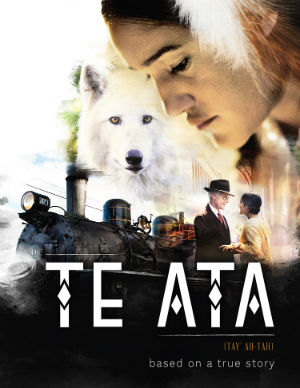 Very few films attempt to portray acclaimed lives from the Native American community. Or at least those who aren’t ensconced in history as proponents for Native American rights in the face of expansionist violence or territorial disputes.

Nathan Frankowski’s Te Ata wants to change that. Based on the real life experiences of a Chickasaw nation woman who left her small Oklahoma community in the early 1900’s and became a prominent stage “storyteller” of her people’s culture, Te Ata dutifully re-enacts an impactful life that excelled in words rather than actions.

As Te Ata (which in her language means “bearer of the morning”), actress Q’orianka Kilcher embodies the independent spirit of this woman with luminous expertise. As she did in her magical debut performance in Terence Malick’s The New World (2005), the quiver of her lips and intelligent gaze speak louder than any dialogue. In fact, anytime she’s not on-screen (which thankfully isn’t much), the film struggles.

One of the biggest struggles occurs early on in the film as it stumbles through episodic portions of young Te Ata’s life, including the violence she sees against her fellow Native Americans and the isolation she experiences as the first woman of her culture to attend Oklahoma College For Women.

It’s here, in her developmental college years, that Te Ata (and the film) finds its sweet groove, however, slowing down a bit and allowing the narrative to go from checking off the biographical boxes to observing Te Ata’s confidence and calling in life grow.

Seduced by the stage and the suggestion of local arts teacher Miss Davis (Cindy Pickett), Te Ata enrolls in a theater class and soon finds herself ignoring the typical Hamlet monologues to recall stories she was once told by her elders. The hypnotic performances she creates, later enhanced by music and dress, become the rage around the school, leading her to a successful career on Broadway. Te Ata becomes so famous that Eleanor Roosevelt befriends her and hires Te Ata to perform at the White House in the late 30’s for her husband’s birthday.

Alongside her professional stardom, the film documents Te Ata’s struggles with problems in her personal life. Encouraged and liberated by her strong-willed mother (Brigid Brannagh), it’s her stern and traditional father (the great Gil Birmingham) that she most wants to impress. And bringing a wiry, Caucasian professor (Mackenzie Astin) home from New York City to marry isn’t the easiest way to ingratiate her new lifestyle to him.

While Te Ata follows a routine blueprint of autobiographical filmmaking, the performances and heartfelt attention to its story overcome the cliches. Financed and nurtured by Chickasaw Nation Productions, writers Jeannie Barbour and Esther Luttrell have mapped out a tale that shares a small part of their culture with the larger world. It is a universal story.

Look no further than the tender moment as Te Ata lies on the heavy chest of her bed ridden father. The two share a quiet conversation in which she reveals her invitation to the White House. The response given by her father, in a weighty and near perfect piece of acting by Birmingham, will melt anyone’s heart, regardless of race or creed.

Te Ata opens in the Dallas/Fort Worth area on Friday, October 6 at the following locations: Firewheel Town Center 18, AMC Dine-In 30 Grapevine, AMC Frisco Stonebriar and The Parks At Arlington 18.