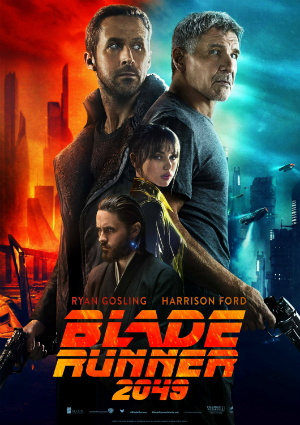 A magnificent, enveloping experience, Blade Runner 2049 is truly gorgeous to behold. Even better, a river of rich melancholy runs throughout the film, which picks up the story 30 years after the events in Blade Runner.

Classic film noir served as a touchstone for many visual touches, Deckard’s world-weary characterization, and the femme fatale look and actions of Rachel (Sean Young), a replicant who draws Deckard’s interest, despite his better instincts. A soaring, sorrowful musical score by Vangelis was also an integral part of the experience, which relied more on the atmosphere than the narrative.

Based on a script credited to Hamilton Fancher and Michael Green, Blade Runner 2049 follows Los Angeles blade runner K (Ryan Gosling), who is himself a replicant. Following a worldwide blackout a few years after the events in the first film, a new generation of replicants “improved” upon earlier generations, but a few remain, and K begins the film by dealing with one of them, Sapper Morton (Dave Bautista). K also stumbles upon a long-hidden secret that demands further investigation and serves as the linchpin of the film.

As with the first film, and most detective stories, for that matter, the characters and the world in which they live become far more fascinating than the mystery itself. As a replicant, K has a computer-generated girlfriend named Joi (Ana de Armas) who acts more traditionally human than he does, displaying a wider range of emotions.

Gosling and de Armas are the emotional center of the film, even though we’re constantly aware it’s not a real relationship, but an idealized one that starts with Joi resembling a fabulously dressed and perfectly coiffed 1950s American housewife. The two actors have great on-screen chemistry, a balance of warm support and chilly precision that rings familiar bells.

Lieutenant Joshi (Robin Wright), K’s superior, is ferociously focused on her work; the mysterious case that arises is the most vital of her career and she is the image of steely determination as she pushes K to get it solved. She is matched by a replicant known as Luv (Sylvia Hoeks, in another excellent, machine-tightened performance), a one-bodied army, just as cool and merciless as K in her work for wealthy industrialist Niander Wallace (Jared Leto).

Wallace and a prostitute named Mariette (Mackenzie Davis) play key supporting roles, as does old Rick Deckard himself (Harrison Ford once again), but the film belongs to K, Joi and Luv, driven largely by the strength of the performers in those well-written roles.

Director Denis Villeneuve is on a remarkable roll, following Prisoners, Enemy, Sicario and Arrival, each distinguishable from the other and all compelling in their thematic intent and method of storytelling. He is complemented here, brilliantly, by cinematographer Roger Deakins in his third collaboration with the director. The lighting is often smudgy, for want of a better word, instead of misty or foggy, as in the first film, shot by the late Jordan Cronenweth.

Blade Runner 2049 looks quite differently, most of the time, than Blade Runner, yet the deliberate pace is deliberately reminiscent. Still, the new film features more action and somehow feels more urgent; it’s similar, but markedly different, too, which makes it all the more rewarding.

Few sequels have topped the original, but Blade Runner 2049 does that and more: it inspires contemplation and hope, even for a dying future world. It may be the best film of the year.

The film opens in theaters throughout Dallas on Friday, October 6.