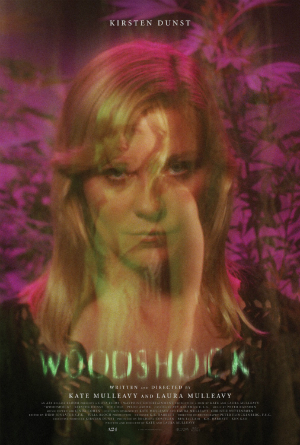 Grief can be a paralyzing emotion all on its own. Combined with guilt, it can easily becoming all-consuming, sapping energy and even the will to live.

In Woodshock, Theresa (Kirsten Dunst) assists her mother to commit suicide and then spends the balance of the film dealing with the devastating aftermath of her own emotions. It’s easy to surmise that Theresa was probably a quiet, reflective personality even before the death of her mother, and now she’s been hurled into an abyss of emotional pain and suffering.

Neither her boyfriend Nick (Joe Cole) nor her longtime friend Keith (Pilou Asbaek) are particularly sympathetic or supportive toward her, except by the most narrow of definitions. She doesn’t appear to have any other friends in the small town in Northern California where she lives, except for young Johnny (Jack Kilmer), who seems to have his own troubles.

She works in a marijuana dispensary with Keith, who supplied the drug that killed Theresa’s mother. He has a much looser personality than Theresa, who keeps her feelings carefully buttoned up. Keith says most of the right things, but without a true desire to put himself out. Surprisingly, Nick isn’t any better; he’s often absent and displays little kindness for a woman he supposedly cares about. He’s impatient for Theresa to get over it.

Instead, Theresa descends deeper and deeper into a pool of anguish and quiet desperation. She smokes pot that’s evidently laced with psychedelics, but instead of helping her cope, she finds herself experience imagery that is discombobulating. She doesn’t take any kind of psychedelic trip; rather, she starts to see flashes of things that unsettle and disturb her further.

An experimental film for the most part, Woodshock is tied only very loosely to a slight, narrative thread. Kate Mulleavy and Laura Mulleavy, who wrote and directed, are esteemed fashion designers, here making their feature debut. Every shot in the film is carefully composed and gorgeous in its own right, and Dunst invites empathy for her steadily fracturing psyche as she falls to pieces.

It’s very challenging to depict such a thing on the screen and simultaneously to compel interest as it happens. While the imagery, mood and atmosphere are all successfully established, the lack of a strong throughline causes the film to collapse, right at the point when it should be gaining urgency.

As frustrating as the film’s opaque nature proves to be for those of us who need to grab onto narrative strongholds, Woodshock is nonetheless a striking debut film. Dunst’s very strong performance is also well-deserving of praise in a work that is more interested in questions than answers.

The film opens in select theaters on Friday, September 29.

Raised in Los Angeles repertory movie houses before spending a decade in tiny Manhattan cinemas, Peter Martin has been freely roaming in DFW multiplexes and art houses for most of the 21st Century. Founder and Editor of Dallas Film Now, Peter also serves as Managing Editor for ScreenAnarchy.com and is a contributing writer for Fandango.com. He also writes the weekly Everything But Horror.substack.com newsletter. He is a proud member of the Dallas/Ft. Worth Film Critics Association. View all posts by Peter A. Martin