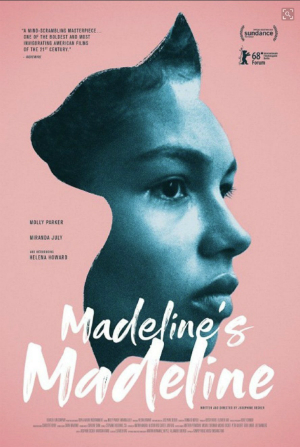 The opening shot of Josephine’s Decker’s latest film, Madeline’s Madeline, is a weird one. A young girl (Helena Howard) is pretending (?) to be a cat, spouting lines that obviously could only exist within the mind of an overachieving theater playwright.

It serves as a shaky, disorienting introduction to a film (and a young female character) that only goes deeper and stranger from there as the lines of reality, play-acting and dominance shuttle back and forth between an experimental teacher, a young girl and her domineering mother.

If all this sounds extraordinarily trying, it is. It’s also a film of brilliance. When I first saw it, Madeline’s Madeline was the last film on a long day of movie watching. I entered it lethargic and exhausted. I emerged frazzled and energized. That’s the type of manic power the film contains.

Manic is, perhaps, the absolute best description one could ascribe to this film. Taking place in the world of avant-garde acting classes, newcomer Helena Howard is the youngest member of such a troupe led by revered New York teacher Evangeline (Molly Parker). In fact, the opening cat monologue turns out to be an expressive bit of acting by the teenager. Maybe.

Evangeline takes a special interest in Madeline, eventually pushing her further to the front of the acting class, drawing out her inner thoughts and shaping the amorphous play around her. It seems to ground Madeline. The other dominant force in her life is her mother (a wonderful, nervous performance by Miranda July). Constantly nagging her, it’s in this relationship between mother and daughter that we learn of Madeline’s troubled mental health history, which only further exasperates our sense of what’s real and what’s not.

From there, Madeline is pulled in two very distinct directions. Evangeline takes such a liking to her that she even invites Madeline along to a family dinner, which creates a terrific set piece that sees Madeline pushing the boundaries of acting even further outside the specified walls of her class. Is this becoming her new mother-figure or does everyone have varied motives for the literal masks they’re wearing?

Staged and filmed with a jazzy sense of editing and handheld camerawork, Madeline’s Madeline pulsates along with just as much insecurity and nervousness as the film’s characters. Like a John Cassavetes film on speed, it continually pulls the rug out from under the viewer as its relationships become mirror reflections of one another and we’re never quite sure if what we’re being shown isn’t a fever dream by young Madeline. In one extremely unnerving scene, Evangeline has Madeline act out the strained conversation she just had with her mother outside, and then has the mother act it out as well, causing the euphoric satisfaction of daughter to be squelched by her teacher. It’s this type of emotional and intellectual volley the film continually mines to create a blurred existence of self and expression.

Being the first Josephine Decker I’ve seen after her much acclaimed Thou Wast Mild and Lovely (2015) and Butter On the Latch (2013), Madeline’s Madeline has me very excited to dig deeper into her work. Not only is it one of the year’s very best films, but a striking example of how visceral a movie can be.

Madeline’s Madeline opens in the Dallas/Fort Worth area on Friday, August 31 at the Angelika Film Center in Dallas.