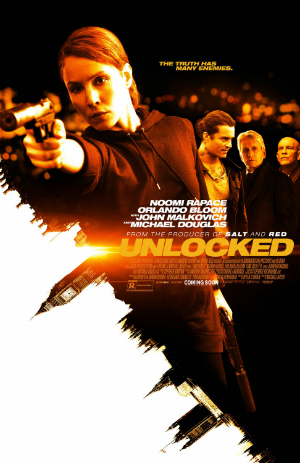 In a summer of female-driven action spectaculars — Wonder Woman (2017) and Atomic Blonde (2017) — it only makes sense that things close with Unlocked.

Maintaining a distant third in relation to those other two tremendously entertaining films, actress Noomi Rapace joins the fray of strong, cutthroat women who rarely blink when confronted with violence and whose quick thinking deduction often prevails against any dangerous situation drawn up against her.

Playing an ex-CIA operative brought back into harm’s way when her special skill set is needed, Unlocked’s milieu is far from the grimy, fluorescent Europe of Atomic Blonde’s late 80’s or the heavily influenced CGI ‘yesterworld’ of Wonder Woman, but its intentions are the same. Kick butt, thrill and excite … which it does to uneven results.

Taking its place in the Europe of today (or rather, 2012, because it’s a film that’s been on the shelf for a while), the film opens with an emotionally scarred Alice (Rapace) keeping tenuous connections with her old MI6 boss (Toni Collette) while she works in a community outreach center.

Brooding and feeling responsible for a terror attack that happened under her watch several years before, Alice tries to repent by passing along tips or suspicions about possible terrorist suspects. It’s not long before she’s actively brought back into the intrigue circle when a special group captures an operative thought to be the message carrier for a chain of very bad guys with malicious intentions.

From there, Unlocked follows a routine digression of double and triple crosses as Alice becomes embroiled in a biological attack. Parading a host of highly familiar faces across its locale of expensive apartments, underground garages and unique boat yards is Michael Douglas, Orlando Bloom (as quite the charming burglar) and John Malkovich who, ultimately, ends up stealing every scene he appears in … naturally. Guessing which side anyone is on is another matter.

Directed by veteran journeyman Michael Apted, whose lengthy career has ranged from groundbreaking documentaries like the Up Series (1970-2012) to the questionable pulp of efforts such as Thunderheart (1992) and even a Bond and a Narnia film, Unlocked plays straight and fast. One can feel a determined hand behind much of the action, which is muted and not bombastic, focusing on hand-to-hand combat and outsmarting one’s opponent.

Outside of all that, the only problem with Unlocked is that’s is a good film until it’s not. After establishing a first half with intelligence and a smartly subdued Noomi Rapace, the film devolves into a series of shadowy men double-crossing each other and the threat of a large-scale terrorist attack with a head villain who barely registers as anything but sullen. Without giving too much away, the absolute best moments in the film are in its opening 45 minutes, especially a scene where Rapace uses her investigative skills to not only glean the appropriate information from her prisoner, but some important lessons about her bosses as well. Staged and executed with paranoid precision, I wished the rest of the film followed this template of intelligence.

Yet, even as Unlocked gets more and more action-film pedantic and the events around her get more and more inflated, Rapace maintains an authority of presence. I certainly wouldn’t mind seeing her in a series of films as a female Bond. The rage and quiet intensity that helped her burst onto the scene with the Stieg Larsson The Girl With the Dragon Tattoo series (2009) is still evident here. Or, perhaps we could get an indie-one off with her and John Malkovich just talking CIA lingo. Now that would be electric.