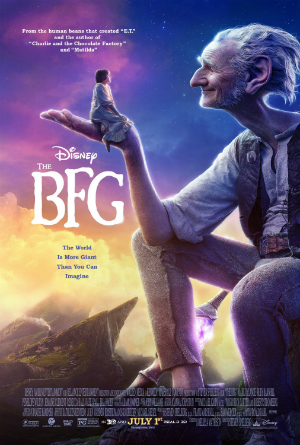 Once upon a time, Steven Spielberg was known as the king of family-friendly entertainment.

That began to change with his eighth feature film, The Color Purple (1985), but it didn’t change dramatically until he tackled Schindler’s List in 1993, the same year that saw the release of Jurassic Park. It’s safe to say that the harsh, intense concentration camp drama changed audience perceptions about the veteran filmmaker in a profound manner.

Since then, his choice of subject matter has skewed largely toward the adult side of the ledger. Five years ago, though, Spielberg made The Adventures of Tintin, a generally lackluster family adventure that felt more like an experiment than anything else. Could he ever tap into the psyche of young viewers again?

Coming off a trio of finely made, yet somewhat dry historical dramas — War Horse, Lincoln and Bridges of Spies — Spielberg collaborates once again with Melissa Mathison, whose original screenplay for E.T. The Extra Terrestrial cemented her reputation after her fledgling success from writing The Black Stallion, and gave flight to one of the great cinematic sensations of the decade.

Mathison passed away last year, but her blueprint for The BFG feels like something that was hatched in the 1980’s. [Later research confirmed my initial impression: Roald Dahl’s immensely popular book was first published in 1982, though its origins stretch back to a short story by the author from 1975.]

In dramatizing Mathison’s script, Spielberg and his usual army of key collaborators — led by Janusz Kaminski (director of photography), Rick Carter (production design), Michael Kahn (film editing), and John Williams (original musical score) — have fashioned a movie for children that looks at home in modern cinemas while retaining an “old-fashioned” pacing and temperament.

The story begins with young Sophie (Ruby Barnhill) living in an orphanage in Britain. The nuns who run the place are unpleasant and unkind to their charges, pocketing money intended for their care and providing a bare minimum for their survival. So when Sophie catches sight of an immense creature stalking about the city streets outside the orphanage, she is more than ready for a great adventure. Almost before she can blink, she is taken in hand by the creature, who sprints back to his homeland.

Thus begins an unusual friendship. Sophie is precocious; her instincts tell her to flee the creature’s home, but that only lands her in more trouble, for it turns out that, as large as the creature appears to her, he is, in fact, quite a little thing in comparison to the other giants in his homeland.

It’s a delightful invention by Dahl to establish that the creature, who becomes known as the titular “Big Friendly Giant” (or, BFG) and appears so overwhelming to her, is quite like a mouse in the eyes of his fellow, brutish and menacing giants. The other giants quite like to eat humans — though one imagines munching on Ruby would be like humans munching on bite-sized candies — in contrast to BFG, who contents himself with eating a nourishing stew of distasteful vegetables.

Superficial comparisons could be made to The Adventures of Tintin, as far as Spielberg stretching the boundaries of animation, yet The BFG has the advantage of the very human Ruby, a tiny thing who inspires sympathy and admiration because of her plucky and positive attitude. Likewise, Rylance manages to invest his character with a great deal of soulful modesty, which is a very becoming quality in a would-be hero.

Good actors providing quality voice-work / inspiration for the appearance of the giants include Jemaine Clement and Bill Hader; they stand clearly apart by their ravenous, selfish personalities. The third act sees the presence of a squad of human actors, who deliver performances that are well-tuned to the story’s tone.

All that is thanks to Spielberg, folding himself back into childhood to imagine what it would be like to encounter a giant who could, in effect, grant wishes. It’s a childish fantasy, to be sure, but quite a heartwarming and endearing experience.

The film will open in theaters throughout Dallas on Friday, July 1.