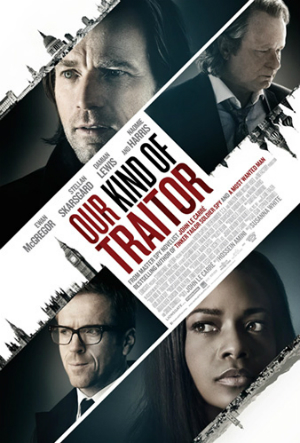 Within the first ten minutes or so of Susanna White’s Our Kind of Traitor, college professor Perry (Ewan McGregor) and his wife Gail (Naomie Harris, doing her best to shake off her Moneypenny vibe from another type of spy film) become embroiled in an international scheme of political treachery, MI-6 spook activity and growling Russian mafia types.

The person responsible for their trip down the rabbit hole of intrigue comes in the form of genial and fast talking Dima (Stellan Skarsgard), who quickly befriends Perry in an empty restaurant in Morocco after Gail has walked out on him due to yet another argument. Morocco, obviously, isn’t the solution to their problematic marriage.

Spurred by Dima’s invitation to a party that night, and then a trip to his large home the next day for a friendly game of tennis, the two strike up a casual friendship. It’s obvious Dima is someone of importance, always trailed by a host of bodyguards and living an extravagant lifestyle.

But this ideal facade is shattered when, soon after, Dima asks Perry to take something back home with him to London and give it to his government, which he blithely does.

At the other end of the skulduggery lies British agent Hector (Damian Lewis), who wants to personally dismantle the framework of criminals and compromised government officials whose work and riches Dima’s information seems to indict. It’s only the beginning of an endless charade that sees Perry, and unwittingly his wife, become central players in an intelligence minefield.

Based on a novel by John le Carre — who can write this type of potboiler in his sleep — Our Kind of Traitor is a solid extrapolation of the storyteller’s penchant for simple talk and suspense over climactic, bone-crunching action set pieces. Granted, there are bouts of gunfire and several sequences that play more toward Hollywood thriller and lose some of the film’s previous airtight complexion of narrative, but overall, Our Kind of Traitor plays things smartly.

And the smartest thing in the film has to be Stellan Skarsgard as Dima. Steady and proficient for years now, he embodies the character of Dima as if he’s a bumbling, good natured giant who not only understands the complexities of the international game in front of him but is prescient in its ultimate outcome. He provides Our Kind of Traitor with the necessary emotional force to root for the good guys.

Like le Carre’s other recent cinematic depiction, Tinker Tailor Soldier Spy, rooting for the right people can be duplicitous, but there’s always something human at stake. Unlike the circus of increasing unbelievability within the James Bond franchise, whose goals seem to be elevating their master spy into a Superman-In-A-Suit, Our Kind of Traitor relies on quiet steam bath conversations and quick thinking in glass walled museums. It’s not perfect, but at least its stakes are real.

Our Kind of Traitor opens in wide release throughout the Dallas/Fort Worth area on Friday, July 1.