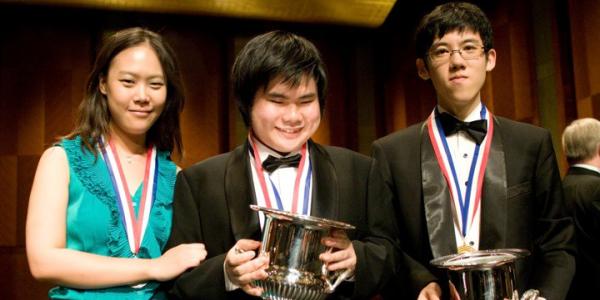 Transportive.  The classical music that is caught in live performance makes A Surprise in Texas essential viewing for anyone searching for great piano playing. The young musicians who travel from around the world to Fort Worth every four years for the Cliburn Competition are incredibly talented. To watch their fingers dance across the keyboard is a marvel to behold.

Beyond the considerable attraction of hearing beautiful music performed by gifted young people, however, the film may leave you wanting. Directed by Peter Rosen, the documentary, which opened tonight at the Angelika Dallas and Angelika Plano (it’s also opening in limited engagements in Fort Worth, Austin, Houston, and San Antonio), assumes a basic knowledge of the importance of the Cliburn Competition, and prefers to spend time listening to the music rather than delving very deeply into the lives of the competitors.

We get the basic gist of the finalists: a blind Japanese man, a bespectacled Chinese man, a South Korean woman who likes to stretch in order to limber up, a flamboyant Bulgarian man, a quiet Italian woman, and a quiet Chinese woman.  The non-finalists are limited in their screen time; the only one we get to know slightly is a 28-year-old Russian entrant who is peeved when he can’t buy alcohol because he forgot to bring his passport — his only form of identification — along with him.

Otherwise we are allowed only quick, official-looking glimpses as they practice, practice, practice, and deal with the stress of the weeks-long competition. Nothing dramatic happens in the film; ‘seldom is heard a discouraging word’ about anything. Oh, one host family reads a review in the newspaper that is critical of their guest, but they dismiss it in favor of the minutes-long ovation he received at Bass Hall.

That’s about as controversial as the film dares to get. Even the title is a bit of a misnomer, since by its emphasize on certain competitors, it’s clear who will emerge victorious, so it’s not surprising at all when it happens.

Lest these comments sound churlish, it is rather glorious to be able to watch these dynamic performers in action. I’ve lived in and around the Metroplex for 10 of the last 14 years, and have heard about the competition many times, without truly understanding the excitement that surrounds it. Seeing it on a good-sized screen at the Angelika Dallas, however, brings it to life.

On that score, A Surprise in Texas satisfied my curiosity. As a documentary, the material is very thin, but as a promotional / education piece for the Van Cliburn Foundation, it’s very effective.

And kudos to them for arranging for pianists from the Cliburn’s Musical Awakenings children’s education program to play in the lobby of both the Angelika Dallas and Angelika Plano before selected screenings this weekend. It was lovely to hear the music throughout the lobby area, and it set the tone for the experience.