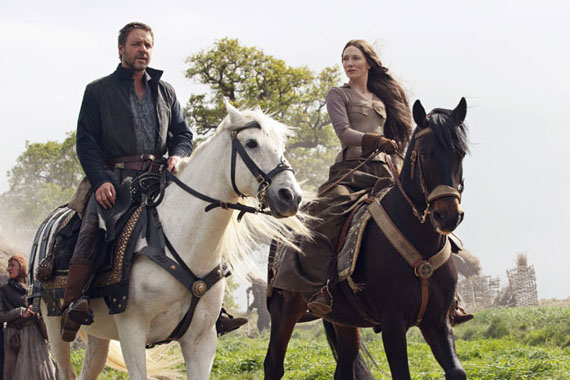 “The more the merrier.”

Cinematic failure is often borne out of ineptitude, creative bankruptcy or simple repetition, but ego must not be overlooked as a prime suspect, especially in the case of a project that feels bloated and unnecessary in the moments when it should always seem slick and inviting: the trailer.  You know you face considerable issues when filmmakers decide to take a character that has been treated about 40 different ways for over 70 years, but do it again, calling it “the untold story.”  There have been Robin Hood films ranging from drama to action to erotica (1969’s The Ribald Tales of Robin Hood).  These films varied in quality and success, by turns sweetly amusing (Robin and Marian) and lowbrow (Robin Hood: Men in Tights), with heroes whose casting was classic (Errol Flynn) and wrongheaded (Kevin Costner).  Even Disney got their share with an animated fox.  One look at the trailer for Robin Hood brings to mind a dozen other bloated, period-battle epics, two of which (Gladiator, Kingdom of Heaven) were helmed by the film’s director, Ridley Scott.  The bottom line:  Robin Hood‘s source material and genre-style framework both deserve a rest.

Unlike the current Scorsese/DiCaprio team-up, Scott and Russell Crowe haven’t excelled on every outing.  Robin Hood is their fifth film together.  Their earlier work has been celebrated (Gladiator), ignored (A Good Year) and modestly entertaining but by no means memorable (American Gangster).  It was only in their most recent picture, the DiCaprio (!) vehicle Body of Lies, that Crowe got to do something he should consider more of:  strong character work in a supporting role.  His doughy, mischievous D.C. insider was a great foil for DiCaprio’s workhorse agent.  A Good Year allowed Crowe to go against the tough-guy grain by playing the romantic lead, but audiences simply didn’t buy it.  It wasn’t a bad film.  It just wasn’t very engaging.  And like Crowe finding suitable roles, Scott needs to think hard about what his next hundred-million-dollar production is going to be, and choose wisely.

Robin Hood begins as King Richard The Lionheart (a brief but enjoyably puffed-up Danny Huston) travels home from the Crusades, besieging the odd French castle as he goes.  His advisor, Sir Robert Loxley (Douglas Hodge) has been away from wife Marion (Cate Blanchett) and father Sir Walter (Max von Sydow) for ten long years.  Richard is struck down in battle, and Loxley charged with taking his crown home to England, but along the way is attacked by French forces under British renegade Godfrey (Mark Strong).  Robin Longstride (Crowe), an archer who travels with a small band of fellow soldiers, finds Loxley, who instructs Robin to return the crown and deliver Sir Walter’s sword.

Prince John (Oscar Isaac), newly crowned King, sends Godfrey off on a tax-collecting journey to build up the coffers following Richard’s expensive crusade.  But the people of England have been worn down by taxes and mistreatment, and soon Robin is in Nottingham, accepting yet another charge, this time from Sir Walter himself: pretend to be Sir Robert so that when Walter dies, the land will not be taken from them by the King.  Again, Robin/Robert accepts, and his mates quickly warm to Nottingham, which is filled with buxom war-brides and Friar Tuck’s (Mark Addy) honey-drenched mead.

So while Robin becomes accustomed to life in Nottingham, and Marion to Robin,  William Marshall (William Hurt) steps in to prevent a French invasion by making John see how Godfrey has betrayed the crown.  After a while, the story becomes unnecessarily convoluted, and what makes it worse is that frequently so much exposition is being crammed into scenes that one starts to glaze over when people talk.  It doesn’t help that Russell Crowe’s accent shifts from scene to scene.

The first and final acts of Robin Hood are battle-ready;  the middle section jumps between idyllic life in the country and shenanigans.  Oh, and there is a taxation-and-pillaging montage.  In case you missed some of that exposition.

If there is a plus side to all this, it’s the support casting.  Hurt, Blanchett and Sydow try valiantly to make something of predictable roles (though at least Sydow, the elder statesmen, has some emotional impact).  Faring better are Robin’s men, with Kevin Durand (Lost), Alan Doyle and Scott Grimes getting the most out of their screen time as Little John, Allan A’Dayle and Will Scarlett.  But as in Sherlock Holmes, Mark Strong looks the part of the villain while being given little to actually do.   And while Oscar Isaac certainly gives his all playing John, he does so in a fashion that does not fit a brooding, muddy, sword epic;  his broad style seems more suited to something along the lines of Spamalot.

Robin Hood can’t be faulted for production values or design;  in fact, everything looks fine, and the seeming lack of CG effects during battle scenes is refreshing.  But we’ve seen it all so many times before, and with far more accessible stories and greater enjoyment, that there remains the question:  why was it made?   With the number of remakes and “re-imaginings” of source material, it’s hard to believe that upper-echelon filmmakers like Scott and Crowe would make the film just to do one better than the rest.  Surely something about the story spoke to them.  But they couldn’t even manage a purely thrilling film, instead allowing the slog of weighty drama to overwhelm every scene.  It’s a shame, as Summer just began with Iron Man 2 and here we are, second week in, and already the season has faltered.   Usually a robot, monster or a guy with a sword could remedy that.

One thought on “Review: Robin Hood”