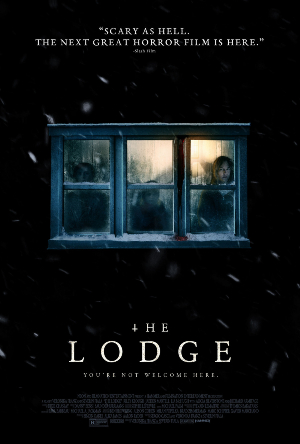 As The Shining showed us almost 40 years ago, nothing good ever comes from a deteriorating mind in an isolated, snow-bound place. In Severin Fiala and Veronika Franz’s new horror film The Lodge, substituting for Jack Nicholson’s crumbling facade into homicidal impulses is the always interesting Riley Keough as Grace, sent packing with her new boyfriend and his two younger children (Lia McHugh and Jaeden Martell) to their winter house after a terrible incident best not revealed here.

The deck is stacked against Grace fairly quickly, as her earnest attempts to get to know the children are muddled when the electricity goes out, the man of the house is away and Grace’s mysterious past — initially established as something quite discomfiting — begins to manifest itself in chilling ways.

With atmosphere to burn and a shadowy aesthetic, illuminated mostly by natural light and the halos of flashlights, The Lodge works best in its first half, establishing an eerie aura. Like Ari Aster’s Midsommar (2019), the film begins on a somber gut-punch of violence, swelling with a sadness that it never quite regains as it tries to weave in and out of the scattered mind of Grace. And Keough, for her part, is utterly watchable and believable.

Outside of her frazzled performance, however, The Lodge missteps fairly often. Extremely hollow in its cruelty and repetitive in its narrative, anyone familiar with the previous work of Fiala and Franz, including Goodnight Mommy (2014), will detect the similarities and how much of a companion piece this work is to the filmmakers’ previous psychological horror film. Both films portray the decomposition of trust and familial bond between the nuclear family in a single environment. Both films ratchet up the atmosphere to, at times, unbearable tension. Both films are torturous in the way they expand and contract the usual horror movie tropes.

The Lodge, however, is less successful because it neglects any tangible connection to its characters. A shocking opening … the rigors of guilt and loss … religious suppression … all of this is introduced in one way or another throughout the film to explain the very horrible machinations of its plot. None of it, though, resonates outside of the filmmakers’ own commitment in crafting a very repulsive and suffocating effort in which not even the pet dog escapes unscathed.

Portions of this review were previously published as part of our coverage of the 2019 North Texas Film Festival.

The Lodge opens on Friday, February 14, at the Angelika Film Center in Dallas.

Copyright 2010-20 Peter A. Martin. All rights reserved. No portions of this material may be used without the express written permission of the copyright holder.