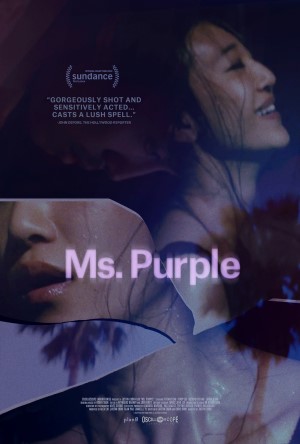 One of the more memorable scenes in Justin Chon’s Ms. Purple sees a prodigal son return home to help take care of his bed-ridden father … then finds himself pushing said father around the bustling streets of Los Angeles, jangling bed and all. As producer Alex Chi told me after I watched the film, most of these scenes were done renegade style, with both actors more than ready to attack the logistical nightmare with spirit.

This type of maverick approach to image-making informs most of filmmaker Justin Chon’s small but potent body of work. His films feel restless and raw, both in visual style and emotion. He also tells intimate stories, dealing mostly with the social and cultural strife of Asian-Americans rooting out a life for themselves in a California that feels similarly restless and raw and even unaccepting at times. With Ms. Purple and his debut film, Gook (2017), Chon has quickly developed a knack for telling specific stories whose sense of time, place and mood rival that of a young Spike Lee. One needn’t look too far to observe the striking parallels between the simmering rage and anger that bubbles to the surface in Gook and Lee’s own New York rallying hallmark of independent filmmaking, Do the Right Thing (1989).

However, culture clash isn’t a major obstacle in his latest film. Instead, Ms. Purple is a tenderly drawn portrait of Korean siblings Kasie (Tiffany Chu) and Carey (Teddy Lee) simply trying to keep their heads above water. Giving a tremendous performance, Chu is the center of the story as a young woman stuck between the sordid details of her life as a karaoke bar hostess and her dutiful responsibility in caring for her comatose father (James King), recently left high and dry when the hired help quits.

Kasie sees no other option but to beg her mostly homeless brother, Carey, to put aside his familial differences and assist her in caring for their father. Through subtle flashbacks, Chon shows us why these three people are fending for themselves, juxtaposed with Kasie’s singular struggle to not only make money, but not get clobbered within the meat market of flesh-for-sale that entices so many young women with limited options.

Working in color this time (as opposed to the silvery black and white that infused his previous film), Ms. Purple is striking for the inner and outer beauty Chon’s camera often catches. Certain images — such as that of a house rooftop that seems to wrangle the golden hue of a California sunset quite unlike any other or the nauseous disco ball colors that permeate the nightclub Kasie works at — are righteously indicative of the character’s swerving emotions. Likewise, the music by Roger Yeun tempos with the melodramatic swings of the film as if it’s chasing the characters to the edges of the frame. Everything in the film is designed perfectly for maximum effect.

And then there’s the central role by Chu in a star-making performance. As Kasie, the weight of the world rests on her shoulders and every time the film tries to bury her a little more, she fights back with resolve.

Winner of the Grand Jury award at this years Dallas International Film Festival, Ms. Purple gets so much right. Whether it’s the examination of family and responsibility in the face of comatose existence or finding happiness in the place we least expect it, the film understands the rhythms of both.

Ms. Purple opens in the Dallas/Fort Worth area on Friday, September 26 at the Angelika Film Center in Dallas.

Portions of this review were previously published as part of our coverage of the 2019 Dallas International Film Festival.