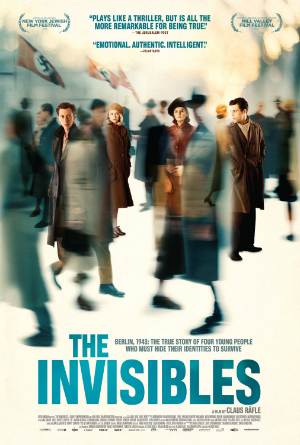 The strongest films that deal with the Holocaust either illuminate and educate through documentary or maintain an emotionally gripping fiction built around a real-life tale of survival and heroics. Claus Rafle’s film The Invisibles (2017), which is just now making its way to Dallas this week, strives to have it both ways and comes up fitfully short of either.

Detailing the episodic lives of a small group of Jewish people who managed to remain elusive from the Nazi ethnic purging through Berlin in the early 1940s, Rafle’s film shows how some survived out in the open instead of the oft-conceived ideal of  cloistered basements and attic crawl spaces.

The most visible of the invisible is Ciomas (Max Mauff), whose story receives the bulk of screen time. Separated from his family during the early years of the war, Cioma’s skills of machinery and paper-making create a unique opportunity to work for the Resistance in forging documents. Taking the time to craft his own fake document of a soldier on leave, this allows him to live freely (but elusively) out in the open.

It’s in his story that The Invisibles conveys a real sense of tension and enlightenment for the way it reveals how one must act like a spy-on-the-run to evade detection. Not only does his forged backstory allow him access to a list of available boarding rooms for sleep, but his smartly generated plan of arriving after 7 p.m. to avoid registration and then leaving before the morning is one of the few tidbits of historical accuracy gleaned from the film.

Less involving are the stories of Hanni (Alice Dwyer) and Ruth (Ruby Fee), who find solace as maids in the house of a German soldier who ignores their Jewish genealogy, or Eugen (Aaron Altaras) and his circle of friends as they roundelay in accepting homes from generous citizens and unsuspecting aged widows.

Outside of these four, The Invisibles touches on a few extraneous people, such as Stella (Laila Witt), a Jewish woman left alone and bribed by the Third Reich to remain in her home and report on old Jewish friends she may discover in hiding. There’s also Ellen (Victoria Schulz), who falls in love with a German soldier after she dyes her hair stark blonde and dazzles him because she looks like one of the movie stars the couple see on the movie-screen together. While these two women receive marginal screen time, I found their stories to be far more engaging than anything else in the film.

But perhaps a greater problem than one of too many stories competing for attention in a film far too slim to give any of them ample weight is the way Rafle blends testimonial interview footage with some of the actual people who lived through these events. Not only do we hear them describe an event, but the film re-enacts those events with his chosen cast. It’s a stunt that creates a disjointed feel in a film already stuffed with stories.

Not to diminish the obviously heartbreaking history The Invisibles is based upon, but it is frustrating for the way it squanders the ingenuity of its survivors in a mixture of formulaic filmmaking. These individual stories deserve better.

The Invisibles opens in the Dallas/Fort Worth area on Friday, March 8 at the Landmark Magnolia.