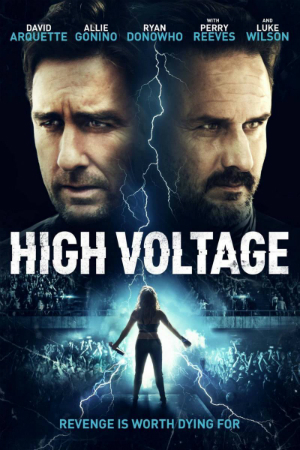 Since the mid 80’s, the idea of rock and roll meshed with the horror genre has given us varied results. Anyone remember the classic Trick or Treat (1986) or especially Rocktober Blood (1984)?

It seems natural, of course, that the lifestyle inhabited by the rock and roll star, with its flamboyant dress, wired hairstyles and devil-may-care excess lends itself so easily to the world of fantastical’ nightmarishness.’ It’s also probably not a coincidence that with the rise of parental disdain for this style of music and their frenzied whispers of satanic influences on a generation of impressionable kids, the sub-genre really picked up steam as a direct affront to those square, uptight adults.

Regardless of its origins, the most important factor of rock and roll horror films is that they exist, often with tongue firmly planted in cheek. And that’s how one must go into High Voltage (previously known as “Hollow Body,” which is a far less forgettable title). Written and directed by Alex Keledijan, the film doesn’t ask for much more than risible entertainment and a story that features David Arquette play-strumming a guitar and replying to everything with “rock and roll,” as if it’s the universal reply to any question ever asked.

As broken down, 50-year-old, former one-hit heavy-metal wonder Jimmy, Arquette finds his next meal ticket in the lovely singing voice of Rachel (Allie Gonino), who appears at one of his parties. Also along for the ride is guitarist Scott (Ryan Donowho), as the three form a rock band. Rachel’s voice is her strongest asset, but it’s one that comes with a price of inferiority as stage-fright often gets the better of her.

That inferiority is quickly subdued when, one night after a show and a disastrous fight with both the band and her domineering mother (Perrey Reeves), Rachel is struck by lightning. Complete with weird vein marks that stripe up and down her arms like some sort of cheap superhero, Rachel quickly comes back to life after being presumed dead with a unique ability to not only belt out the latest song she’s written with sassy verve, but literally kill someone with her kiss. It’s no surprise, then, after overcoming something as final as death, Rachel’s virtual ‘deal with the dark side’ charisma propels the band into new heights of stardom.

Staged as more of a weird, low-rent science fiction thriller than an outright horror film, it’s clear writer-director Keledijan harbors an affinity for the films of David Cronenberg. Yes, the film does linger over the crisp corpses of those that Rachel leaves mangled in her path, but it also (at times) interestingly explores the prickly side of dominance and dual identity that come with fame and a second chance at tasting the fast life that comes with meteoric popular acceptance.

Outside of these ideas, however, High Voltage doesn’t leave much of an impression. Choosing to employ a bland voice-over, and performances from Arquette and the rest of the cast that feel lethargic and culled from every rock and roll cliche ever read, the film even fails to register a memorable song or melody. It often holds on the writhing face of Rachel as she sings in a halo of shadows, the audience rarely shown. Budgetary constraints aside, it’s a very claustrophobic film that doesn’t do any justice to the believable trajectory of the band’s enormous, new-found fame.

If anything, the film’s loudest swipes come not from the voice of Rachel, but at the unequal state of a musical industry that prefers a kinetic and dangerous lead singer over originality. The film also appears to have even more fun at the expense of Luke Wilson as an opportunistic record producer, who displays all the salacious trappings of a quid pro quo agreement with the band. Of course, Rachel is game.

That she leaves a trail of unexplained deaths in her wake is probably the sharpest commentary on the dog-eat-dog nature of showbiz than anything else. In that regard, High Voltage earns its place in camp rock and roll/horror history.