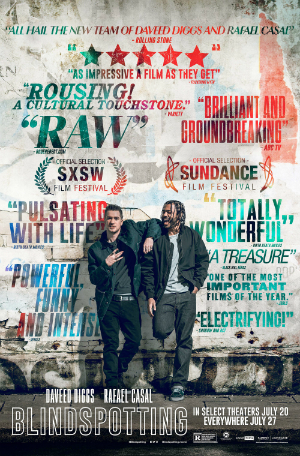 The third film in as many weeks to contextualize or radicalize our nation’s exploding tensions about class, race and ideas — after the overwrought The First Purge and then Boots Riley’s blistering Sorry To Bother You— Carlos Lopez Estrada’s Blindspotting is no less impactful on the subject, even though it goes about its business in a mostly light-hearted way. But similar to Sorry To Bother You, the film still deftly blends simmering social commentary/protest against a raucous buddy comedy template that poises itself to be a huge breakout summer hit.

The buddy comedy aspect comes as Estrada observes two lifelong friends — newly released ex-convict Collin (Daveed Diggs) and short tempered Miles (Rafael Casal) — over the course of three days. Collin just wants to survive his halfway house existence and be freed from probation, while Miles seems to be trying everything he can to land his buddy back in the slammer: carrying guns, getting in fights, and smoking joints.

Most of the humor derives from this updated Laurel and Hardy-esque dynamic and the ease in which actors Diggs and Casal interact is startling. This should be an easy thing as well, since they also wrote the script and their magnetism seems honed over a period of time.

Things do get tense, though. While driving home one night, Collin witnesses the police shooting of an unarmed man by a white police officer (Ethan Embry). Initially just part of the racial strife happening in the increasingly gentrified West Oakland neighborhood, it’s an act that will haunt Collin for the rest of the film, allowing the narrative to jump outside the real into flights of damning fancy inside the continually confused head of Collin.

What director Estrada has done is manufacture a timely film that deals with an epidemic in a surprisingly fleet footed manner. Seamlessly blending several types of genre into one hugely entertaining film is not an easy thing to do. The shifts and starts Blindspotting makes reminds me of early Tarantino or especially Spike Lee. That the film can have you laughing endlessly one moment and then cringing over the image of a young child playing with a loaded gun the next exemplifies the assured hand that Estrada, Diggs and Casal exert in a film that actually has a lot to say about this moment in time.

Portions of this review were originally written as part of coverage for the 2018 Dallas International Film Festival.

Blindspotting opens in the Dallas Fort Worth area on Friday, July 27.