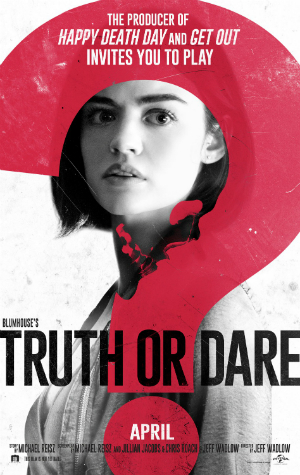 Made with competence and care, Truth or Dare aims to be more of a mystery puzzler than a horror thriller. Yet I still found myself empathizing with a character in the movie who checks his watch during one early scene, as if to say, ‘Get on with it!’

The scene, which takes place in an abandoned mission in Mexico, comes at the conclusion of a spring break vacation for a small group of friends from California. Good girl Olivia (Lucy Hale) is lured onto the trip — instead of volunteering for Habitat for Humanity, as she’d planned — by her best friend Markie (Violett Beane) because, with graduation looming, this will be their last opportunity to party before they go their separate ways.

On the final day of the PG-13 rated trip, Olivia once again covers up for the drunken Markie’s promiscuous desire for intimate male companionship, despite the presence of Markie’s boyfriend Lucas (Tyler Posey) just a few feet away. (His back is turned.) After that incident is resolved, Olivia finds herself lured to an abandoned mission by Carter (Landon Liboiron), a handsome boy. Of course, she implores her friends to join her, which leads to a fateful game of truth or dare.

Directed by Jeff Wadlow (Kick-Ass 2) from a script on which he shares credit with Michael Reisz, Jillian Jacobs and Christopher Roach, Truth or Dare shambles through its opening scenes with a studied nonchalance. The mystifying ramifications of the game are quickly felt, first by Olivia. Confronted abruptly by people around her in a school library, whose faces have been oddly twisted, she blurts out a “truth” that instantly breaks up the relationship between Markie and Lucas.

Since she is the only one who could see the contorted faces and hear their insistent chant for “truth,” none of her friends believe her, not even after Ronnie (Sam Lerner), who wormed his way into the game in Mexico and is not really a member of their clique, suffers an accidental fall in a bar where he saw/heard a similar, weird faces/voices illusion as Olivia.

Soon enough, Olivia is able to convince her friends that something strange and possibly deadly is going on, but it takes her most of the movie to get to the source of the supernatural phenomena. Meanwhile, she battles to regain her friendship with Markie.

What makes Truth or Dare distinctive is the strained friendship between Olivia and Markie. Olivia is presented as a “good girl,” but early on it’s suggested by a nasty companion that she harbors lusty feelings toward Lucas. She denies it, of course, but it is notable that she is a single woman among her few friends, and it’s not at all suggested that he is concentrating on her schoolwork or her post-graduation life.

For her part, Markie is still mourning the death of her father; could that be why she is promiscuous in her infidelity to Lucas? Is she only using Olivia as a shield to protect her from that truth? Lucas himself, despite being one of the stars of the movie, is not truly important to the story, which is far more concerned with Olivia and Markie.

Truth or Dare definitely lags in the early going, which is why I could identify with that character checking his watch, and then it misfires as it endeavors to ramp up tension, flaring up flames and then reducing then without much rhyme or reason. As a whole, the movie doesn’t deliver on its more promising elements and remains neither sufficiently mysterious nor horrifying.

The film is now playing in theaters throughout Dallas.