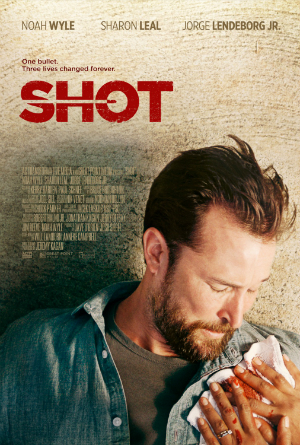 A lot of films say they intend to reflect the catastrophes of gun violence, and then handle the idea in glibly emotional ways or, even worse, lose the idea completely behind a Robert Altman-esque canvas of liberal preaching and showmanship.

Jeremy Kagan’s Shot leans towards some of the same preaching but it communicates the literal ramifications of gun violence better than most films, trapping us in the perspective of a gunshot victim immediately following the accident and his hours in the ambulance and emergency room. Basically, if I never hear the wheezing sound of a collapsed lung anytime soon, I’ll be very happy. That’s the visceral impact Shot contains.

The gunshot victim is Mark (Noah Wyle). When we first meet him, he’s heavily involved with editing the sound of gunshots in a Western (naturally), uncomfortable with the lack of reverb in his work. Forced to leave quickly and meet his wife Phoebe (Sharon Leal), their marriage has deteriorated to the discussion of divorce.

Outside the restaurant where they agreed to meet, the couple talk casually when a stray bullet strikes Mark in the left chest, leaving him near death on the pavement. Across the street, young Miguel (Jorge Lendenborg, Jr.) is in the process of handling said gun to protect himself from bullies when it accidentally goes off. Using all methods of split screens, tri-screens and real-time narrative structure, Shot follows both sets of people as they deal with the incident.

Eventually settling on Mark for a good majority of the film, Shot effectively details his journey with gruesome detail and (at times) squeamish authenticity. Through his disoriented eyes and ears, we hear the technical jargon spewed back and forth between his ambulance drivers (one of whom is played by Malcolm Jamal Warner) and the causally brilliant way they alternate between their understood verbiage and the off-handed ways they try to make Mark feel comfortable. It’s a series of conversations and reactions that feels so organic, we wonder if we’re watching the pilot for a reality television show.

This attention to medical procedures is further expanded upon once Mark arrives at the hospital and his emergency room doctors (head doc played by Xander Berkely) whizz and dance around his wounded body. Mixed between point of view shots and standard one-two setups, Shot rarely leaves Mark’s strained face as he’s forced to piece together the snippets of conversation he overhears. Things certainly don’t improve when his breathing gets heavier and the addition of a tube to his body is applied in real time with bloody consequences.

As Mark, Noah Wyle gives a touching performance. He’s asked to do a lot without having the full expression of his body, utilizing his eyes and mouth to register the pain and confusion that slowly swallows him.

Less successful is the parallel story of Miguel, on the run and feeling guilty for his actions. Too often framed in loud, lazy arguments between him and the friend who loaned him the gun, Shot loses some impact in these portions before gradually bringing both parties back together for quite the resonant finale.

Director Jeremy Kagan, who’s been working since the 1970’s and whose best film is the under-appreciated and underseen 1978 comedy noir The Big Fix, starring Richard Dreyfuss, shows his astute hand at balancing all aspects of the film. By focusing so much on the incapacitated Noah Wyle, Shot could have ended up as a claustrophobic exercise in grief paralysis. Kagan, with a script by Anneke Campbell, knows just when to open the story up and focus elsewhere, creating that much more of an impact once Mark, Phoebe and Jorge collide and reckon with their fateful moment. The film may have initially sought to build a hopeful case against gun violence, but it ultimately becomes attuned to the hopeful case of forgiveness more than anything else.

Shot opened in limited release in New York and Los Angeles on December 15. It will be  available on Video-On-Demand platforms beginning Friday, January 12.