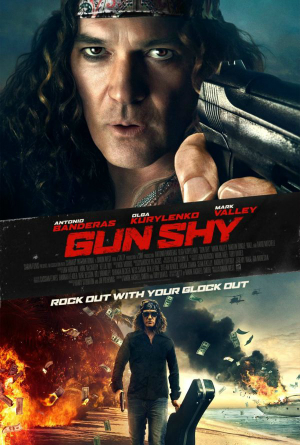 I can see why Antonio Banderas may have been attracted to Simon West’s Gun Shy. Playing an aging heavy metal rocker whose since receded from the public eye into a nest of his own weird insecurities and knee jerk anger could supply a wealth of hammy fun.

Part of that’s true. Banderas does bring some unique energy and off-the-wall ‘cartoonishness’ to his Turk Henry persona, but the rest of the film is an oddly assembled weave of childish slapstick humor and tepid characterizations flaying about in a script that wants to be a dark comedy, but sorely misses the mark. The minute a llama kicks a man in the head, causing him to shoot his girlfriend within the first ten minutes, I knew something was completely wrong with Gun Shy.

Things don’t get any better after the previously noted llama revenge, which only sets in motion a chaotic plot that involves Olga Kurylenko being kidnapped by a group of ‘pirates’ as she and husband Turk vacation in his native country of Chile. Scrambling for the money and a way to free his beautiful wife, Turk comes into contact with a variety of people either trying to hinder or help him.

One of those people trying to help is his agent’s secretary Marybeth (Aisling Loftus), a curt and peppy British woman who not only helps him sidestep his agent in getting hold of the money, but joins him in Chile to get involved in the increasingly madcap adventure.

Trying to hinder the rescue is government agent Harding (Mark Valley) who sees a way to make some quick cash at the expense of Turk’s international imbroglio. Besides overacting, the Harding character is the film’s link to slapstick comedy, involving a speed boat and (most ludicrously) Banderas making an escape from him down a busy Chile street riding his two-wheeled luggage.

To complicate matters even more, Kurylenko’s wife begins a sort of Stockholm-syndrome with head kidnapper Juan (Ben Carlo). Their scenes together may be the most vapid in a film full of wasted energy. Besides revealing nothing about either character, these scenes represent shoddy craftsmanship as reaction shots feel ill-timed and the moments of poignancy are funneled without any effect.

Recapping the plot of Gun Shy feels laborious even now. Based on a book titled Salty by Mark Haskell Smith, who also co-wrote the screenplay, Gun Shy is a mystery of a film whose intended audience baffles me. At times, the sharpness of its comedy comes into full effect, such as the ostentatious decoration of Turk’s hotel room, full of over-sized marble artifacts like a 4 -foot tall lighter and matching cigarette. At one point, he asks the concierge if she’s there to fix said lighter because it doesn’t work.

However, the vast majority of Gun Shy is jaw-droppingly bad, both in technical construction and tone. If it weren’t for the foul language, beer swilling and occasional video flashback to the debauchery of Turk’s once-legendary heavy metal career, Gun Shy plays like a PG-rated kids movie. It’s that confusing, misguided and, ultimately, forgettable.

Gun Shy opens in the Dallas/Fort Worth area on Friday, September 8 at the AMC Grapevine. It also begins playing on Video-On-Demand platforms the same date.