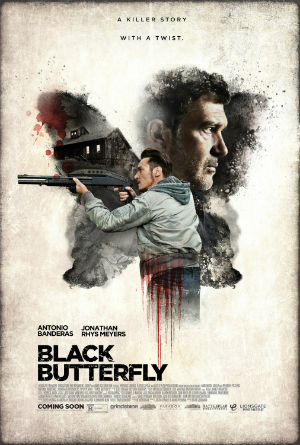 “In most movies I see, the characters are just what they are. Characters in a movie. Nothing seems real or how life really is.”

Those words, spoken by a drifter played by Jonathan Rhys Meyers who’s picked up and given shelter by constipated writer Antonio Banderas, could be read two ways: one, as a smarmy and self-reflexive quotation on the characters we’re watching that moment or, two, as an indictment on the actual film itself that not only riffs so many ideas from better films but turns into a banal thriller complete with shameless finale. Add to the fact that Brian Goodman’s Black Butterfly is already a remake of a 2008 French TV movie of the same name (directed by Christian Faure) and the balance of creativity is long overdue.

Appearing more rugged and washed-out than usual, Banderas would seem an unlikely choice for the alcoholic, bitter writer named Paul living in a remote part of the Rockies, yet he’s actually the best thing about the movie. Opening with him sitting at a typewriter (yes that antiquated movie prop) as he types “I’m stuck” over and over is only the harbinger of movie references to come. Once a promising talent, he’s hit the wall with his latest novel, upset over how movie studios have treated his scripts and the fact that his current publishing house insists his new manuscript undergo some revisions.

Enter a tattooed, lanky drifter named Jack (Rhys Meyers), who not only helps Paul ward off a bully in a local restaurant but ably offers to help make improvements around his dilapidated ranch. Not long after that, the duo become locked in a psychological battle once Jack learns of Paul’s intense writer’s block and sets out to do whatever he can –violent or not — to rattle Paul from his doldrums.

Eventually settling into an interior thriller, confined mostly inside the rustic confines of Paul’s ranch and land, Black Butterfly shifts into a thriller as Banderas and Meyers continually turn the tables on each other. A beautiful realtor named Laura (Piper Perabo) gets caught in the testosterone maelstrom as collateral damage, so viewers can feel empathy for someone not caught in the middle of the two boys’ pissing contest.

Without giving too much away, there are revelations and third act structure changes that add intrigue to everything that’s gone before in the film, however, Black Butterfly doesn’t create any interest or suspense in getting to that point. The characters are stock, the emotions are static and it all becomes a sleek exercise in potboiler thriller without any genuine energy. Instead of the lines quoted above to begin this review, perhaps the typed lines of “I’m stuck” would have been the proper way to introduce things.

Black Butterfly opens in the Dallas/Fort Worth area on Friday, May 26 at the AMC Dine In Mesquite 30. The film also opens on VOD platforms the same day.