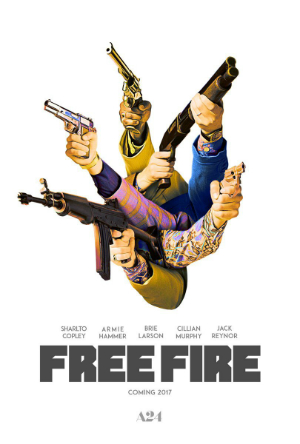 A biting, riotously funny ‘crime family’ comedy married to great gun-fu, Free Fire features the best crawling ever seen in an action movie. It’s like Down Terrace meets The Driver with nothing but guns. And a rock or two.

Ben Wheatley and Amy Jump began collaborating creatively on Kill List as both writers and editors, with Wheatley in the director’s chair. That team up has continued through Sightseers, A Field in England, High-Rise, and now Free Fire, a run of films that are remarkable for their diversity in subject matter and approach.

Like Down Terrace, Wheatley’s feature directing debut, Free Fire concerns an extended family of criminals. Unlike the family in Down Terrace, though, most of the criminals in Free Fire are not related by blood, so when the inciting incident occurs, no one hesitates to grab a gun and start shooting, consequences be damned.

The setup is simple: two gangs meet in a warehouse to exchange money for guns. Things are already tense when two members of the opposing gangs recognize each other from a very unpleasant encounter the night before. Moments later, war breaks out.

Wheatley and Jump lay a basic foundation and then add to it as the narrative moves forward. Each character is out for him or herself, and each one is able to justify their actions in their own head and feel good about it. It’s survival of me, me, me!

Because it’s Wheatley and Jump, the dialogue is acerbic and very, very dark. One-liners join forces with muttered exasperations and throwaway darts at others. The gangs divide to conquer and then reunite to survive, but it’s all contingent on the spur of the moment and no loyalty is necessarily lasting.

All the performances are just fine and dandy, bringing authenticity to their anguished desperation. The gun-buying gang is led by Chris (Cillian Murphy); the gun-selling gang is led by Vernon (Sharlto Copley); the middlemen are Justine (Brie Larson) and Ord (Armie Hammer).

Considering the number of gang members, it’s a remarkable feat that Wheatley is able to keep them all sorted out visually. Once the gunslinging gets underway in earnest, the action is clean and comprehensible, and it’s rare to see camera setups repeated, if at all. Laurie Rose once again served as cinematographer, and it’s extraordinary artistry on his part to capture all the action with a variety of lighting, perhaps another benefit of teaming with Wheatley on all his films.

The premise may make it sound like Free Fire is nothing more than a shoot ’em up, but the reality is that Ben Wheatley has once again made a fully fleshed-out, very funny, yet dramatic picture with real substance and a stinger of an ending.

Reviewed at Alamo Drafthouse Richardson, auditorium #6. The film is now open at select theaters in Dallas; check the official site for locations and to buy tickets.