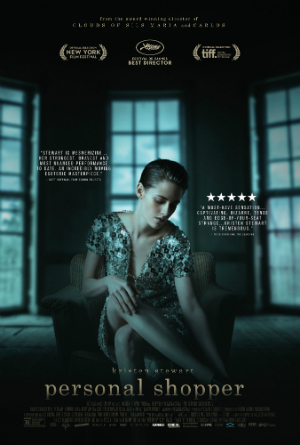 Kristen Stewart stars as Maureen Cartwright, a woman who is almost always in motion. She lives in Paris, but just barely; she spends nearly every waking hour as a personal shopper for a busy, busy celebrity she rarely sees. The celebrity needs her wardrobe to be constantly refreshed and so Maureen hops around the city on her motor scooter, whirling from one exclusive shop to the next, picking out expensive clothing and other personal items and then delivering the items to the celebrity’s apartment.

Maureen has long tired of any supposed glamour associated with the freelance gig, but she needs the money to pay for her apartment, and she needs the apartment so she can remain in Paris until she is contacted by her twin brother, who recently died.

It turns out that Maureen is a medium. Her brother was also a medium. Long ago, they resolved to make contact if either of them died, and her brother died, so now Maureen is waiting with as much patience as she can muster to hear from her brother.

Self-employed as she is, and constantly moving around Paris and between France and England, she has become increasingly lonely, and haunted, not only by the loss of her brother but by her own demons. There are clear signs that she is suffering from deep, probably clinical, long term depression.

The only ray of light that enters her life arrives in the form of a mysterious text message, which then leads her on a journey that may lead either to personal enlightenment or authentic danger.

Collaborating once again with writer/director Olivier Assayas (Clouds of Sils Maria), Stewart gives an absolutely spellbinding, extremely low-key performance. It’s genuinely affecting and strikingly emotional to watch Maureen endeavor to cope with her troubles, and to see how she subtly changes throughout the narrative.

Despite subject matter that might sound dour or off-putting, Personal Shopper is entirely engaging. Stewart’s quiet fortitude gradually forms Maureen into a heroine of epic proportions, an imperfect human doing battle with forces that are beyond her control, yet desperately seeking, somehow, to survive and fight back.

Assayas displays steady command of the material and the pace never slackens. Cinematographer Yorick Le Saux (A Bigger Splash, Only Lovers Left Alive) does a magnificent job of making the gloomy darkness that surrounds Maureen come alive when needed.

This is a ghost story as personal drama. It’s impossible to take your eyes off the screen.

The film opens at the Angelika Film Centers in Dallas and Plano on Friday, March 24.