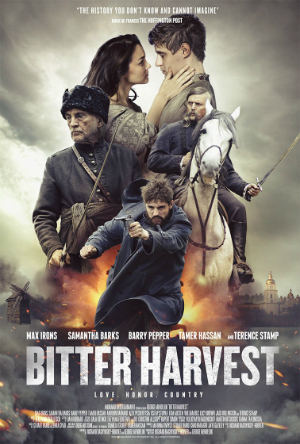 While their method may not always be completely respectful (or even tasteful to the nationalities themselves), there’s a long line of films whose purpose is to reflect a horrible moment in history while spinning a story that will attract or identify with our universal understanding of love, compassion or terror.

Films like Doctor Zhivago (1965), Son of Saul (2015), Schindler’s List (1993) or In the Crosswind (2014) – a film that takes on the same subject as Bitter Harvest – all reflect atrocities or upheavals wrapped in either a lush love story or piercing technical abilities that make us shudder and recoil from the evil present in our world. They are effective in the stories they tell.

George Mendeluk’s Bitter Harvest attempts the same thing with limp results. Focusing on the ‘Holodomor,’ a period of severe repression and genocide inflicted on Soviet Ukraine and its ethnicities located in the Northern Caucasus between the years 1929-1933, it’s a moment in history that feels severely under-represented on film. Unfortunately, Bitter Harvest squanders its powerful background with a film that elicits neither compassion nor interest.

The film revolves around young Yuri (Max Irons) and Natalka (Samantha Banks), who have been friends since childhood. Flirtatious and obviously meant for marriage, they spend their days tending to the productive Ukranian fields of their homeland. Descending from a long line of warriors, including his father (Barry Pepper) and grandfather (Terence Stamp), Yuri is decidedly different. Having a talent for art, his dream is to escape the fields and attend school in Kiev.

All of their ambitiousness is thwarted when Stalin (Gary Oliver) ramps up his national plan to accumulate the Ukrainian fields and add them to his collective farm system for Mother Russia. Leading the band of soldiers in their heinous acts, which includes murder, rape and arbitrary burning of homes and property, is the film’s central villain Sergei (Tamer Hassan). His repeated entrance into the village while scowling and speaking in a deep accent is a textbook example of the ‘bad Russian.’

Lingering on a host of atrocities, Bitter Harvest follows the usual pattern of rebellion and eventual evolution of Yuri from introverted art student to Gulag-imprisoned freedom fighter.

Equally transformed is Natalka at home. Responsible for helping grandfather Stamp organize feeble resistance attacks and even coming face-to-face in a duel with evil Sergei, there are hints that her story may overtake the central one, but it doesn’t, choosing instead to pull back onto Yuri and his heroism with a band of fighters.

Filmmaker Mendeluk, whose career has spanned some 35 years, starting with the Americanized giallo thriller Stone Cold Dead (1979) and stopping along the way with Meatballs III (1986) before an array of low budget action films and TV efforts, obviously feels a responsibility in telling such an important story with Bitter Harvest, yet it features numerous problems.

Usually immune to such a facile observation, the British accents of so many of the participants here immediately signal something is off. Further still, the lead performance by Max Irons evokes nothing. It’s hard to believe him as either an unacknowledged master artist or freedom fighter. And when the film turns to action set pieces towards the end, they’re compiled and edited in a jumbled fashion that belies the film’s almost made-for-TV-like allowance.

It’s only in the last few minutes that Bitter Harvest touches on some genuine depth and emotion as it replays its opening scene. It’s a scene that not only emphasizes the futility of the time, but re-calibrates our perception of the story. If only more moments had been realized like this. And perhaps this is the film’s most glaring weakness. It gives us a tepid love story and forgetful characters against a backdrop that should be anything but tepid and forgetful.

Bitter Harvest opens at the Angelika Film Center in Dallas on Friday, February 24.