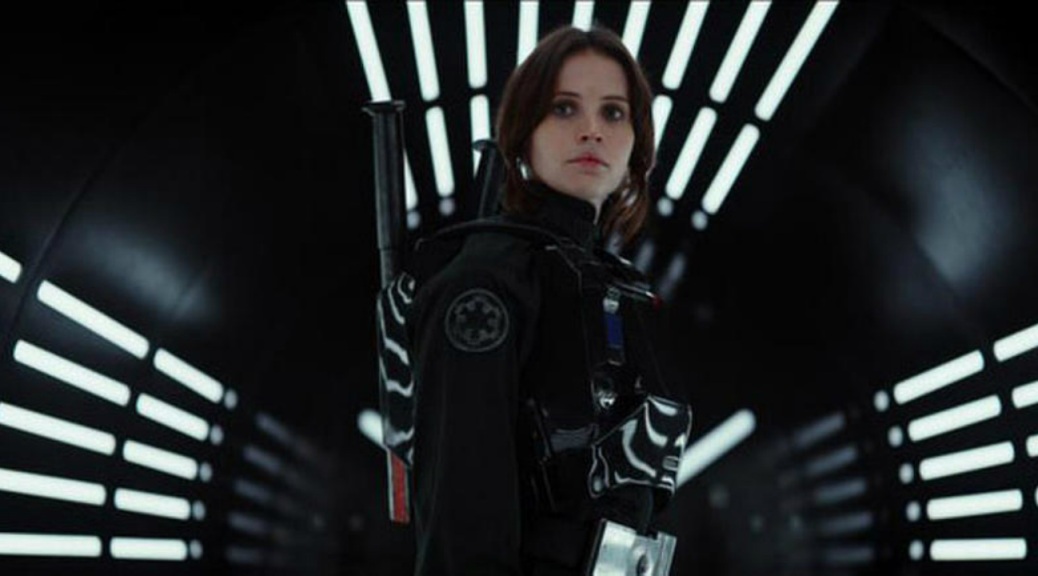 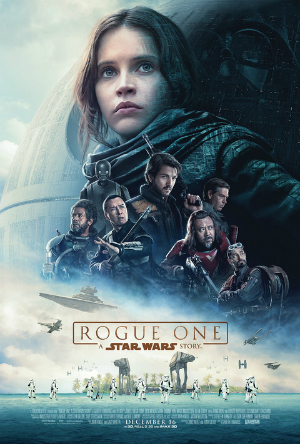 A machine-tooled, reasonably-entertaining product for the modern age of studio filmmaking, Rogue One: A Star Wars Story delivers, more or less, almost exactly what might have been expected after its premise was first announced.

It fits carefully into a small pocket of time that has been established for its existence, with the main thrust of the story beginning shortly before the events depicted in Star Wars: Episode IV – A New Hope. By necessity, it’s a dark, gloomy period when the Empire is in its ascendancy and the Rebel Alliance is still on its heels, largely overwhelmed by the superior military strength of the Empire and frightened by rumors of the so-called Death Star, a planet-destroying weapon that will soon be added to its arsenal and make it invincible.

Jyn Erso (Felicity Jones) and Captain Cassian Andor (Diego Luna) are the leading players in behalf of the Rebel Alliance, though Jyn is only a reluctant recruit. Her father Galen Erso (Mads Mikkelsen) is a science officer for the Empire is and is held accountable for the creation of the Death Star, though his loyalties are in question. Cassian is sent on a mission to find Galen and Jyn is convinced to become a fulcrum to crack open his location.

Initially Galen and Jyn are joined by Cassian’s copilot K-2SO (voiced by Alan Tudyk), a very tall, former Imperial security droid, and Bodhi Rook (Riz Ahmed), a former Imperial pilot who has worked with Galen. In time, they are joined by Chirrut Imwe (Donnie Yen), a blind fighting monk, and his fighting partner Baze Malbus (Wen Jiang), who is a weapons expert.

On the villainous side, Orson Krennic (Ben Mendelsohn) hisses angrily and often, with General Tark (a computer-generated Peter Cushing) as an adversarial counterpart and Darth Vader (voiced by James Earl Jones) a looming presence.

Devoted followers of the Star Wars films will likely be pleased by the fanservice (images, characters, and even a partial line or two of dialogue) littered throughout Rogue One. Even though this is ostensibly a stand-alone movie, the tone is similar to that found in Star Wars: Episode V – The Empire Strikes Back, with the rebels on the run from the forces of evil.

With his third helming effort, it’s difficult to see any sort of stamp by director Gareth Edwards. Certainly, it’s a dark film set mostly in worlds that are weary and exhausted, suggesting a thematic and visual connection to George Lucas’ first stab at a space opera (which he later cleaned up and cluttered in his revised edition). Yet it’s also balanced by lighter moments, typical of those found in typical ‘men on a mission’ movies that were reportedly an influence for Edwards. Whether that was the original intention is, frankly, impossible for an outsider to say or discern.

Simply because its storyline starts shortly before the beginning of a well-known film, Rogue One is, inevitably, an extremely schematic endeavor. We know, basically, how the story will end, so enjoyment of it depends more than ever on the characters and the performances, which have never been strong points in Star Wars movies. Still, Jones and Luna bring a willing spirit and grim determination to their roles, which keeps the narrative afloat throughout its surprisingly languid pace.

As visual eye-candy, Rogue One is top-notch, throwing more things at the screen than I can ever recall in the past. Coupled with its constant nods to the past and future, that makes the movie more than passable as armchair entertainment.

The film opens with preview screenings on Thursday evening and then opens wide in theaters throughout Dallas on Friday, December 16.