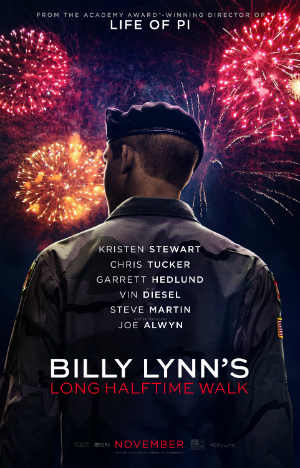 Much ballyhooed for director Ang Lee’s fight to shoot it at the high frame rate of 120 frames per second in 3D at 4K, Billy Lynn’s Long Halftime Walk arrives in Dallas movie theaters at the standard 24 frames per second in 2D. (* Except at one location in Addison; see below.)

As things worked out, only a few theaters in New York and Los Angeles are set up to present the film as Lee desired, so for those of us who live elsewhere, we must wrestle with it as it is: a major disappointment that looks very much like it was made for television. In 2D, all its shortcomings are plain to see.

The anti-war storyline, adapted by Jean-Christophe Castelli from Ben Fountain’s award-winning 2012 novel and set on a single day in 2004, is entirely conventional. Specialist Billy Lynn (newcomer Joe Alwyn) is a soldier in Iraq who has gained fame because a news photographer captured a moment when he came to the aid of a fellow soldier. Lynn and his fellow Bravo Squad members are sent home for a two-week press tour, culminating in a presentation during halftime of a football game in Dallas on Thanksgiving Day.

Lynn is suffering (most likely) from post-traumatic stress syndrome, and so are most of his fellow soldiers. They are spooked by any sudden or loud sounds and react as they would on the battlefield. Lynn’s sister, Kathryn (Kristen Stewart), has planted the idea in his head that he should remain home, rather than returning to Iraq, and so he is wrestling with that as well on the final day of Bravo Unit’s leave.

Ang Lee established himself in the 1990s with a series of films — from Pushing Hands through The Ice Storm — most notable for their convincing characterizations. Beginning with Ride with the Devil and quickly cresting with the elegant Crouching Tiger, Hidden Dragon, Lee sought to expand his horizons, sometimes reaching bruising personal heights (Brokeback Mountain) and sometimes allowing visual ambitions to overwhelm all else (Hulk, The Life of Pi).

Billy Lynn’s Long Halftime Walk feels like the latter type of ambitious failure. Presented in 2D at 24 frames per second, one is struck by a surfeit of close-ups, often featuring the characters looking straight at the camera. The profusion of talking heads resembles how a documentary filmmaker might approach the material. Combined with a reliance on lighting that looks overly bright on a movie screen, it looks more like it belongs on a small screen.

None of that would matter as much if the characters were more distinctive or if the narrative weren’t so well-worn. Some of the plot devices are tiresome. The unit has hired an agent (Chris Tucker) to try and sell the movie rights to their story, demanding that it be accomplished during their brief trip to the U.S. The football team owner (Steve Martin) is a fatuous representative for all clueless business people who know nothing of war.

Just to make sure we get the point, another fatuous businessman (Tim Blake Nelson) tries to strike up a conversation with the unit, a representative for all clueless business people who know nothing of war but don’t own a football team. Billy Lynn catches the eye of a fatuous cheerleader (Makenzie Leigh) who immediately falls for him and wants to make out with him. Oh, Billy is a virgin, too, and thus (presumably) pure of heart.

Despite its anti-war inclinations, the movie is respectful toward all military personnel, as opposed to the often dumb and insulting civilians who dare to mouth off to them. Once the rusty plot engine cranks up, though, piloted by well-meaning and entirely heroic soldiers like Billy, Dime (Garrett Hedlund) and Shroom (Vin Diesel), the narrative putters along like a golf cart in a cornfield before harvest.

Billy Lynn’s Long Halftime Walk fails to engage at the most basic levels, pushing away rather than intriguing or enveloping audiences in its message.

The film opens in theaters throughout Dallas on Friday, November 18.

* Late word is that the film will screen in 120fps/Dolby Vision 3D at the AMC Highland Village on the Parkway 9 in Addison.