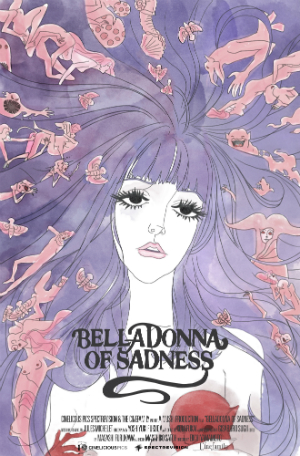 The 70’s is one of my favorite decades of cinema for several reasons. Not only did the New Brat pack of Hollywood (Scorsese, Coppola, Spielberg, etc.) fully hone their skills and chart exciting territory in an ancient-feeling Tinseltown that would reverberate still today, but films like Eiichi Yamamoto’s ‘Belladonna of Sadness’ (1973) existed. Adult-oriented animation, based in folk fairy tale, and sprayed across the screen with complete seriousness in imagery and tone. If anything tops the phantasmagoric visual style of the film, its the swooning psychedelic rock soundtrack that accompanies its narrative. Basically, ‘Belladonna of Sadness’ is the complete trip and deserves to be seen on the big screen.

Presented in a new restoration courtesy of Cinelicious Pics, Belladonna of Sadness concerns beautiful Jeanne and her desire to wed strong Jean, a literal trick that is just the first of many double entendres and allusions. When they can’t afford the taxation imposed by the local feudal lord, he proceeds to cast out Jean and rape Jeanne, an act that quickly alienates her desirability to her proposed husband.

All of this is represented in fascinating and mind-melting animation from artist Kuni Fukai. At once abstract and violent, ‘Belladonna of Sadness’ imparts its feelings through a variety of styles. Flames are represented as tiny wisps of color that curl up around white legs. The bubonic plague is shown to turn ordinary people into shifting charcoal gray forms. And, perhaps most startling, the impacts of forced sexual aggression and a body being pierced by arrows are rendered with blinding streaks of throbbing red. Fukai’s animation works on a primal level. We feel the colors and sense the violence. It’s something I haven’t quite felt from an “animated” film in a long time.

Yet all this artistry would ring hollow if not for something more, which filmmaker Yamamoto applies through his use of movement within each delicately realized hand-drawn frame to maximum effect. Like legendary auteur Nagisa Oshima did a few years earlier with his film ‘Band of Ninja’ (1967), the camera pans and tracks across a storyboard of images that not only creates action, but implies time passing and memory. It’s a conceit that wonderfully compliments the base animation and breathes life into its characters.

Based on a mid-nineteenth century book by Jules Michelet about witchcraft, ‘Belladonna of Sadness’ does indeed use these arcane mysteries and old wives tales to weave a seductive and dark story. But its the flashes of humanity- the sadly drawn eyes of Jeanne, the quivering lips as she wonders what her life might have been and, at the end of the film a passage that alludes to further real life history- that provide Yamamoto’s daring film with a pulsing heart beyond the simplistic label of ‘adult oriented cartoon’. Go see this and prepare to be dazzled, puzzled, and eventually heartbroken.

Belladonna of Sadness will have a limited engagement in the Dallas/Fort Worth area beginning Friday, May 13 at Alamo Drafthouse cinemas. Go to http://www.drafthouse.com for information.