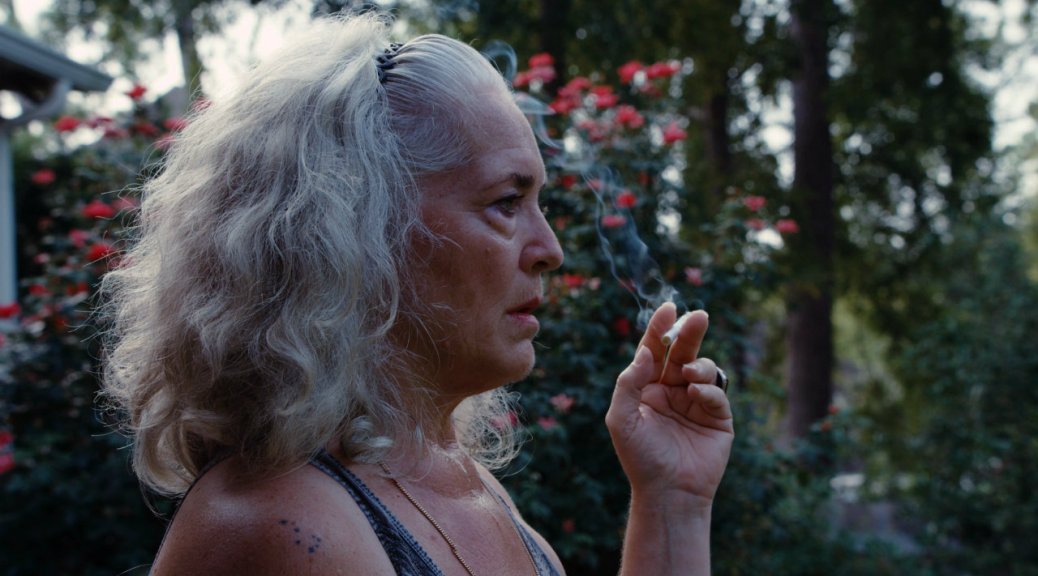 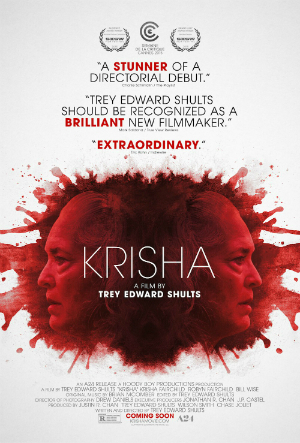 From the opening scene of Trey Edward Shults’ Krisha, things are locked on ‘slight haywire’ from the get-go. In one unbroken steadicam shot following her dutifully from behind, the title character Krisha (Krisha Fairchild) finally frees her half caught skirt from under the door of her truck and wanders the neighborhood trying to locate the right address to her destination, trudging through the neighbor’s yard and stepping in a mud puddle before staggering to the right door where she receives her warm welcome inside.

From that skittish prologue, the film’s title card sprays across the screen in bright red with ominous shrieks from the film’s equally unsettling soundtrack. It’s a subtle nudge that we’re about to witness something more akin to a psychological horror rather than a routine family drama. And that’s exactly what we get with Shults’s Krisha, an invigorating and assured debut feature that’s been gaining traction since bowing at South By Southwest last year.

Once (un)comfortably inside the proper home, the film slowly allows tidbits of information to spill out about Krisha and her estranged family over the course of a long Thanksgiving holiday weekend. Her early twenties-aged son, Trey (played by the director himself), noticeably goes out of his way to avoid his mother, spending time arm wrestling with his cousins, playing video games or tackle football in the backyard. Krisha’s own feeble attempts at communication with him consistently fail.

Krisha’s sister, Robyn (Robyn Fairchild), does her best to deflect the growing instability in her home by assigning Krisha a host of cooking duties, which she does, happily, while also slipping away to partake in a slapdash of pills and red wine stored in her luggage. Hinting at ancient indiscretions of drug abuse and mental trouble, Krisha tries to balance her past and present in this maelstrom of holiday cheer where everyone is putting on a good face.

On the periphery of the family drama is a variety of people, old and young, including Robyn’s husband Doyle (played to rollicking perfection by Bill Wise), new mother Olivia (Olivia Applegate) and grandmother Billie Fairchild. As a sort of silent Greek chorus on the weekend’s events, they (along with the audience) watch as the tension, resentment and emotional violence leads to a slow crescendo.

Cast with a majority of his own real family and filmed in the actual Texas home of his parents, it’s hard not to simply be wrapped up in the giddy ‘homeslice’ appeal of Krisha. Listening to actor Bill Wise – as uncle Doyle – wax rhapsodic on the patio will ring true to many native Texans’ fond memories of a distant relative with too much booze on his breath and too many ideas on his mind. Yet, outside of that, Krisha could have been filmed anywhere because its blunt force trauma of eroding passivity over the course of a joyous holiday weekend is so familiar.

As the title character, the word “blunt force” can also be applied to Krisha Fairchild’s performance. Intense eyes, wrinkles of age covering her face and wiry white hair that seems to get more and more uncontrollable as the film goes along, she reminded me of Gena Rowland’s brilliantly unhinged performance in John Cassavetes’ A Woman Under the Influence (1974). Fitting, perhaps, since Krisha won the John Cassavetes award at this year’s Independent Spirit Awards, which is given to the chosen best film made for under $500,000. Both films reveal a woman deteriorating in front of their families despite their best intentions. It’s an award that often signifies a startling new talent, and Trey Edward Shults and Krisha certainly excite me for his future endeavors.

Krisha opens on Friday, March 25 at the Angelika Film Centers in Dallas and Plano.