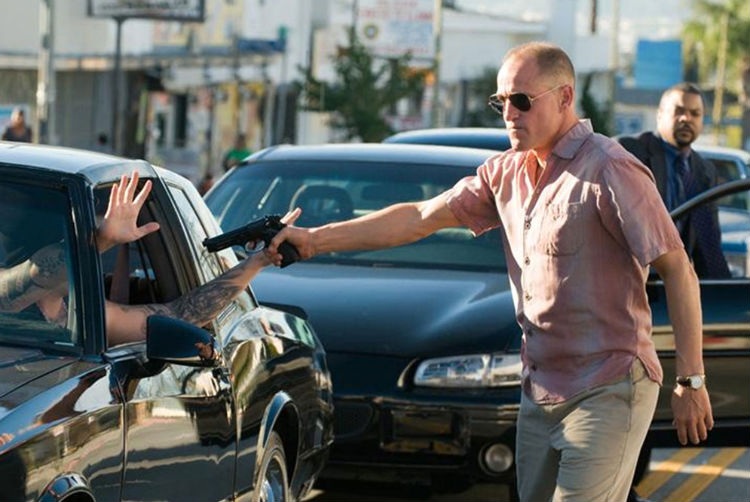 In Oren Moverman’s edgy drama ‘Rampart,’ boasting a screenplay credited to Moverman and crime novelist James Ellroy, Woody Harrelson stars as Dave Brown, a veteran officer in the Rampart Division of the Los Angeles Police Department. (Yes, that’s the infamous division where corruption is alleged to have been widespread in the late 1990s.) The movie is set in supposedly post-scandal 1999, during a short period of time in which Dave seems determined to create a new one-man wave of corruption.

In the opening scene, he displays a rancid, misogynistic attitude toward a female rookie officer, and then quickly demonstrates that he has no hesitation about savagely beating a handcuffed suspect to obtain information. He’s got 24 years on the job, and he’s not about to change his ways.

Like all good-looking, physically-fit scumbags, Dave is catnip to the ladies. He has two ex-wives, Barbara (Cynthia Nixon) and Catherine (Anne Heche), who are sisters and live on the same property. Barbara lives in the main house with her rebellious teenage daughter Helen (Brie Larson), with Catherine tucked away in the guest house with young Margaret (Sammy Boyarsky). Dave bounces around between them all, in some kind of misguided attempt to maintain control over a domestic situation that is steadily slipping through his fingers.

When his ex-wives resist his sexual overtures, he satisfies his needs with women he easily picks up at bars. He’s an equal opportunity sexual shark, open to ladies of color as well as Caucasian women.

When he’s the victim of an automobile accident while on duty, his instincts kick in and he beats up the other motorist. Unfortunately for Dave, his attack is caught on tape, leading to a downward spiral as the law-enforcement dinosaur sees his options in life starting to shut tight on him.

Dave claims that he’s doing “the people’s dirty work,” but there’s no evidence that he’s doing anything of the sort; all we witness him doing is beating people up and trying to save his own skin. He has an expanded knowledge of the law, which evidently came from studying to become a lawyer, so he’s well-acquainted with legal justifications for his actions. But he’s irritatingly smug about it, and, in general, is repellant for anyone who doesn’t want to sleep with him. And he’s wearing out his welcome with them, too.

His downward spiral accelerates throughout the film, leaving a greasy residue that is certainly memorable; Harrelson is top-notch in the role. But it all feels too familiar and one-note in its harsh pessimism, rubbing our noses in filth over and over again for nearly 100 minutes. Harrelson is so convincingly vile that his mere presence becomes oppresive, transforming the film into an endurance test.

The supporting cast is superb, featuring Ned Beatty as a retired corrupt cop, Robin Wright as an attorney who is perversely attracted to Dave, and Sigourney Weaver and Steve Buscemi as unsympathetic politicians. Beatty and Weaver are especially good.

Moverman is a good director, but by remaining so relentlessly focused on a single character, the movie provides no context for his actions and certainly no enlightenment about the culture of corruption that engulfed the Rampart Division. That makes it difficult to recommend ‘Rampart.’