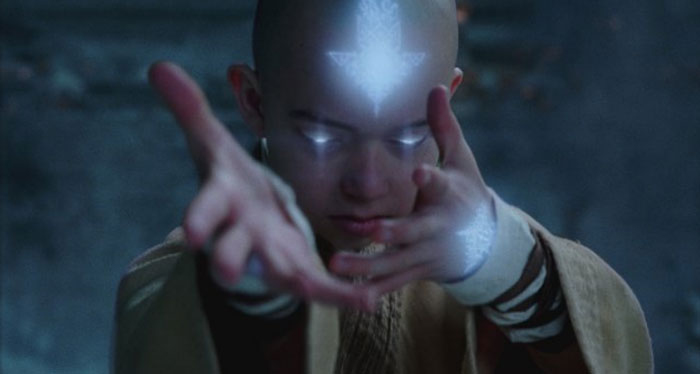 “We want to minimize their bender sources!”

There is a priceless moment in Raiders of the Lost Ark, when a crowd parts to reveal a swordsman who whips out his scimitar and performs an intricate display of handiwork, promising a difficult battle for the film’s hero.  Tired from a long, bad day, he simply pulls out his pistol and shoots the swordsman from several feet away.  Problem solved.  One wonders why no one in The Last Airbender, where certain characters have the mystical ability to “bend” elemental properties (air, water, earth or fire), just runs up and bludgeons the threatening “bender” before they can complete their obligatory (and similarly time-consuming) martial-arts-meets-tai-chi-style dance move.  It would have made the story, which already feels strangely truncated, much more brief and satisfying.  Clumsily filmed and acted, and filled with uninspiring special effects filtered through an unnecessary and woefully underutilized 3-D process (that was tacked on for the sake of box office dollars), The Last Airbender is a thudding failure.

While there are no priceless moments in director M. Night Shyamalan’s new film, there is also a decided lack of pricey-looking ones.  For a Summer blockbuster with explosions of light and sound, an enemy armada, a flying woolly-beast and people who can make fire and water leap about at will, Airbender is a surprisingly flat, unexciting film.  The story takes place in a time and place unspecified:  what we know is that bands of benevolent, Inuit-like, elemental benders are slowly being forced into servitude by the stronger and more fearsome fire clan, whose “machines” are spoken of by the locals with great trepidation.  I am unsure why this timelessness and maybe-Earth, maybe-not location wore thin for me; when a character asks another if he is “okay”, I wondered how they knew what that word meant?

Siblings Katara (who can bend water) and Sokka (who cannot) are out hunting one day when they find young Aang frozen in a block of ice (along with the aforementioned woolly beast).  Once thawed, they learn that he is likely the fabled Avatar, a monk-like bender who has power over all four elements and will defend the innocent masses, or something.  There is a hall of many statues that represent all the prior incarnations of the Avatar, but really we know next to nothing of their history or purpose.  Airbender is a movie where an excess of exposition is tossed out at regular intervals, yet little is actually known when the credits role.

Young, shamed Fire Prince Zuko is also looking for the Avatar, to get back in the good graces of his father, Fire Lord Ozai.  A critical failure of the film, on top of everything else:  Zuko is intended as the conflicted villain of the story (despite that his father is the one moving forces into place for a final confrontation, both for this and alleged future chapters), yet his portrayal is so bland that it undercuts any threat or sense of danger that should be derived from the character.

Shyamalan has made good-looking films, often with casts led by very talented actors.  So after the downward spiral from The Village through the execrable The Happening, The Last Airbender needed to impress in a big way.  It is both disappointing and damning that the director’s fantasy-world excursion is uninteresting and dull, and further impacted by a mostly unknown cast of flat, uninspired actors.  Whole scenes of dialogue occur without the slightest change in a person’s face;  emotional impact is trapped in a void somewhere off-screen, while technical prowess is nowhere to be found.  The backdrops and scenic imagery are dim and boring.  But in 2010 it is hard to believe a director of Shyamalan’s apparent pull cannot find adequate special effects teams to enliven his film.  And the 3-D process adds nothing to the finished product.  In fact, with the exception of a handful of moments where the depth perception is enhanced, the 3-D seems to have been added for the purpose of selling glasses.  It’s shameful, really.

But let’s suppose you get the casting wrong, add faulty special effects, edit the plot until it is unintelligible…well, there’s always the action, right?  Airbender has several opportunities for invigorating fight scenes that should have taken your mind off its failings.  But even then, something as basic as that is completely undermined by Shyamalan.  In an early battle, we view the start of a fight at chest level, essentially removing any view of the majority of the martial arts action.  Then the same fight is seen in the blurry background, as if to say this is unimportant.  And in other scenes, people seem to move about slowly, as if their bending abilities took away their lower body strength.  From Errol Flynn to Donnie Yen, fight scenes have been a reliable staple in cinema.  How exactly do you screw that up?

After so much criticism, it seems unfair to batter the film and its director over the head for a potentially unnoticed flaw.  But according to the story’s anime origins, all of the primary characters are Asian, and the inclusion of a mostly white cast has outraged a cadre of geeks and nerds who, like any aficionados, want some integrity in their favored source material’s adaptations.   If you didn’t know any better, you could hardly be annoyed by that not-so-small detail.  Shyamalan has given you plenty of other reasons to feel cheated.

When the Harry Potter series and the Lord of the Rings trilogy came out, there must have been a flurry of activity in Hollywood, production teams seeking out new fantasy properties to mine for box office gold.  But in some cases that strategy is followed up with questionable or downright bad execution.  The Golden Compass was not a bad looking film, nor did it have a cast of shoddy actors (Nicole Kidman and Daniel Craig?  Who wouldn’t find that intriguing?).  But something just didn’t connect with audiences and the series seemed stopped in its tracks.  Alternately, the Twilight series seems to be doing just fine though for the life of me I don’t know why…dramatically they seem like dulling experiences, and their special effects are far less thrilling than, say, the dinosaurs in Jurassic Park (made 17 years ago).  But Airbender promises future chapters with a sort-of cliffhanger.  One can hope that, if the film miraculously makes a fortune and a second installment is green-lit, an overhaul is done to completely re-vamp what Shyamalan has wrought.