Shorn of its political subtext and played broadly for laughs, The Losers emerges as breezy, populist entertainment. 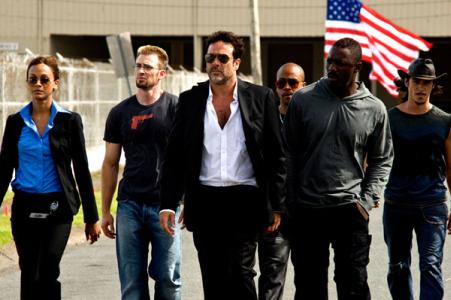 Judging from the first 12 issues, the source material was not some deep philosophical fount. (That’s as much as I’ve read of the 32-issue series, published by Vertigo from 2003-2006.) Writer Andy Diggle structured the book as a series of self-contained missions undertaken by the former members of a special teams force. But what missions! As illustrated, for the most part, by the single-named artist Jock, the pages burst with energy and play very much as Diggle intended: a “man crush love letter to Shane Black,” the screenwriter of Lethal Weapon, The Long Kiss Goodnight, and Kiss Kiss Bang Bang.

The movie version, directed by Sylvain White (Stomp the Yard) and scripted by Peter Berg and James Vanderbilt, jettisons the darker elements entirely, notably its simmering anger against American interventionism and clandestine activities by government agencies. The characters are also warmed up in sentimental fashion.

Set in Bolivia, the opening sequence establishes the squad members: Clay, the calm leader (Jeffrey Dean Morgan); Roque, the volatile #2  (Idris Elba); Jensen, the joker (Chris Evans); Pooch, the driver (Columbus Short); and Couger, the silent one (Oscar Jaenada). They narrowly escape assassination. Presumed dead, the are quickly approached by Aisha (Zoe Saldana), who offers them a way back to the US. All they have to do is murder Max (Jason Patric), the CIA operative responsible for trying to terminate them.

From there the film moves briskly through a series of  action sequences that are well-staged but not particularly memorable. Director White tries to hide the use of body doubles through slow-motion inserts of the stars in action, but it’s not terribly effective. Rather obvious CGI stands in for fiery explosions and other effects, which is a bit jarring.

The comic chemistry between the players, however, is genuinely fun to watch, and continually on display. The film is filled with wisecracks, physical humor, and funny bits of business, and it sustains the narrative through some of its more outrageous leaps of logic.

Evans easily steals the show, a bundle of infectious, manic entertainment that’s always “on.” And because he’s only part of the ensemble, and not the lead, he doesn’t have the chance to wear out his welcome as he takes turns parrying  with the other actors to varying degrees. Morgan and Elba are both strong actors and bring substance to their roles as the ultimate alpha males, while Jaenada is more iconic than personable.

Saldana is one of two wild cards, especially in comparison to the original series. Her long, lean looks are showcased to such an extent that Aisha comes across more as superfluous eye candy than as an integral element of the plot. Patric chews up the scenery in his biggest comic role in memory as Max, which elicits laughs, even as it contributes to the throwaway nature of the movie as a whole. After all, if the villain isn’t convincingly evil, how seriously can anyone take this stuff?

The Losers is an enjoyable ride, an 80s-style blast of pinball jolts, and a better comedy than an action flick. In other words, it’s a perfect popcorn picture for a multiplex weekend.