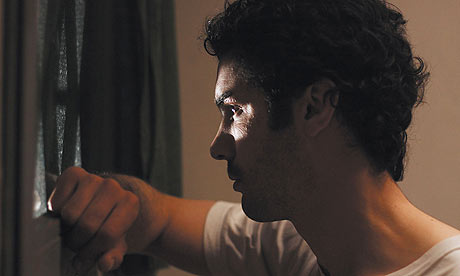 A Prophet begins on the day 19-year-old Malik El Djebena (Tahar Rahim), a repeat juvenile offender sentenced for the first time as an adult, enters a French prison.  It ends six years later on the day he is released.  The film effectively charts his rapid growth both as a man and as a criminal during this relatively short stay.

Malik has several strikes against him already when he arrives:  he is Arabic, which places him at odds with non-Muslim prisoners and he is soon protected by a Corsican crime lord, which places him at odds with everyone else.  He is completely alone, with no outside contacts, friends or family.  And he is semi-illiterate.  But worse than all of this, Malik is naive about how things work inside prison, despite his alleged history of criminal violence.  A Prophet is about a young man’s education, acceptance and ascent in crime, and the building of what will become his empire.

Shortly after his arrival, Malik is approached by Cesar Luciani (Niels Arestrup), who promises work and protection if the young man will kill a new Muslim inmate named Reyeb (Hichem Yacoubi ).  It’s Reyeb who tells Malik “the trick is being smarter when you get out,” and he does avail himself of the many classes the prison provides.  Once his violent initiation is past, Malik is visited by Reyeb’s ghost, who haunts him in a rather hellishly esoteric fashion for years to follow.

A Prophet creates a largely condensed world within cramped cells, shower stalls and consultation rooms, rarely venturing beyond institution walls.  Yet when it does, the freedom of rather average city streets is deafening.  When Malik has the chance to wade into an ocean, he stands in a single spot, feeling the water on his feet as if surrounded by four walls.  Doing time marks the man indelibly, and practice becomes habit, as seen in a chilling moment when he goes through airport security and makes a single gesture that is demanded only by prison guards.

Once he has gained Cesar’s somewhat limited confidence, Malik acts as the elder’s “eyes and ears” while maintaining a good reputation with the largely unseen prison staff.  Working throughout the prison, he gleans information and valuable lessons that books will never teach him, yet will serve him and provide leverage during his deals and dealings with various criminal elements.  In time, the Muslim populace grows and Cesar’s crew is disbanded.  Malik is smart enough to follow the flow of such shifts in power to make the most of his relationships inside and out.

Director Jacques Audiard (The Beat That My Heart Skipped) creates a dense and brutal atmosphere while showing the gradual growth of a young man in an environment that could easily have swallowed him whole.  Malik’s journey is powerful and thoroughly engaging, yet not without moments of sympathy and delicacy.  And A Prophet ends on a wonderfully subdued note we are almost uncertain how to decipher: is it the happiest ending such a man’s story could achieve, or a deceptive calm before what must surely be greater chaos?