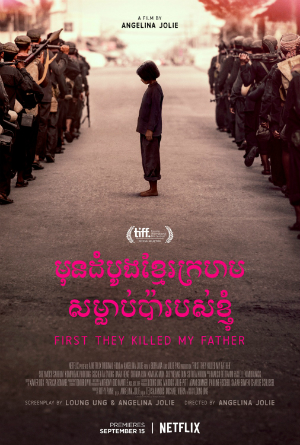 The latest film from Angelina Jolie feels more personal than ever. Her oldest child was born in Cambodia; she adopted him a year later. She recently stated: “I wanted my son to know who his countrymen are.”

Based on Loung Ung’s memoir, first published in 2000, First They Killed My Father: A Daughter of Cambodia Remembers presents an unflinching view of genocide through the eyes of a child. Ung told her own story as the youngest child in a warm, loving and supportive family. One day in 1975, after the U.S. had finally pulled out of a losing war in neighboring Vietnam, the Khmer Rouge came to town. Loung and her family were forced out of their home and onto the road, along with thousands of their fellow Cambodians.

Soon they would endure steadily worsening conditions under the constant menace of automatic weapons, which served, in effect, as prison bars in the open-air camps. Everyone suffered in common, as the effects of a famine took hold and physical will was beaten down over time by the drumbeat of enforced physical labor for all, including the youngest of children.

When they weren’t working, they were indoctrinated into Communist teachings by strict military teachers, who tried to convince everyone that this was all to their benefit, as individual family members were separated from one another and, in many cases, marched to their murder.

And it only gets worse from there.

Jolie shoots a portion of the film from the eye level of Loung (portrayed by Sareum Srey Moch), a portion of the film from Loung’s own perspective, and smaller portions from the medium shot and “God’s Eye” (overhead looking down) perspectives, mixed in with dolly shots, all captured by expert cinematographer Anthony Dod Mantle, known for his work with Danny Boyle. (He won an Academy Award for Boyle’s Slumdog Millionaire.)

The photography reflects Loung’s circumstances; the colors are sublime when things are peaceful and fine, but drain away as the full horror kicks in. Jolie has certainly developed as a feature filmmaker, from In the Land of Blood and Honey (2011) to Unbroken (2014) to By the Sea (2015), steadily progressing from intense drama to operatic excess to languorous romance.

Distinctive as it is visually from Jolie’s earlier work, First They Killed My Father mostly strikes a fine balance between humanism and outrage. It’s difficult not to become infuriated by the conditions suffered by the Cambodian people, even if it was more than 40 years ago, because we are aware of the direct parallels to horrible events happening in the world today on a daily basis.

Yet Jolie steps back continually to look at the larger picture, allowing Loung to wrestle with her own emotions as a child thrust into a life that adults can barely comprehend. Above all, the film is sobering and, yes, didactic. That’s a good thing, in my view.

First They Killed My Father is now available to watch on Netflix.