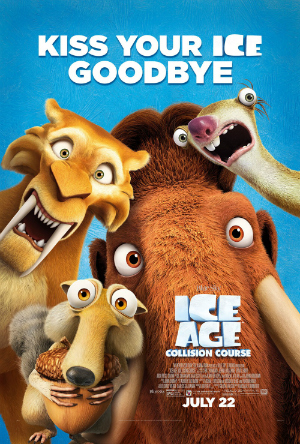 The fifth entry in an animated series that dates back to 2002, Ice Age: Collision Course tastes like a popsicle that’s been stuck in the back of the freezer too long.

Certainly it resembles the previous four films. The series has never been very ambitious, either visually or thematically, but silly humor and skilled artistic craftsmanship have made them sturdy, dependable vehicles for generally gentle rides into family-friendly territory.

The first film focused on the importance of friendship, while the succeeding films have shifted the emphasis to familial relationships. That continues to be the case with the newest installment, as woolly mammoth Manny (voiced by Ray Romano) and his wife Ellie (voiced by Queen Latifah) must deal with the reality that their daughter Peaches (Keke Palmer) is quite serious about pairing up with Julian (Adam Devine), a kind yet foolish sort of young animal. As Manny and Ellie battle with their emotions, they are also put to the test by an impending meteor strike, along with the rest of their ever-growing pack of animal friends.

Narratively speaking, Ice Age: Collision Course is not terribly interested in forward momentum. As part of Blue Sky Studios’ signature franchise, it doesn’t pay right now for the series to do anything more than tread water. That may change if worldwide financial returns ever wane — the previous installment earned more than $715 million — but until that happens, the series is bound to inch along at a crawl.

Like its predecessors, Ice Age: Collision Course is aimed primarily at young children, who are apt to be pleasantly distracted by the episodic nature of the movie. They probably won’t care that the main plot threads are ancient and exhausted, but their parents (and other adults) might.

The elements that once distinguished the series — its bright color palette, its juvenile-skewing antics — have grown dim and dusty, without anyone making an evident effort to freshen the formula. With the increasing number of animals in the cast, it’s also become more difficult for the filmmakers to come up with new things for them to do.

It’s not that any of the previous films came close to nightmarish villains but at least the “bad guys” had some bite. Over time, though, all the characters have become ever more sympathetic, and even the ones who lean toward villainy have become toothless.
That may be good news for parents and other adults concerned about the deleterious effects of morally bankrupt and nasty animals in animated movies. It’s a warning sign that the series is losing its appeal, however, for other adults who are simply fans of animation in all its forms.

The film opens in theaters throughout Dallas on Friday, July 22.

Raised in Los Angeles repertory movie houses before spending a decade in tiny Manhattan cinemas, Peter Martin has been freely roaming in DFW multiplexes and art houses for most of the 21st Century. Founder and Editor of Dallas Film Now, Peter also serves as Managing Editor for ScreenAnarchy.com and is a contributing writer for Fandango.com. He also writes the weekly Everything But Horror.substack.com newsletter. He is a proud member of the Dallas/Ft. Worth Film Critics Association. View all posts by Peter A. Martin