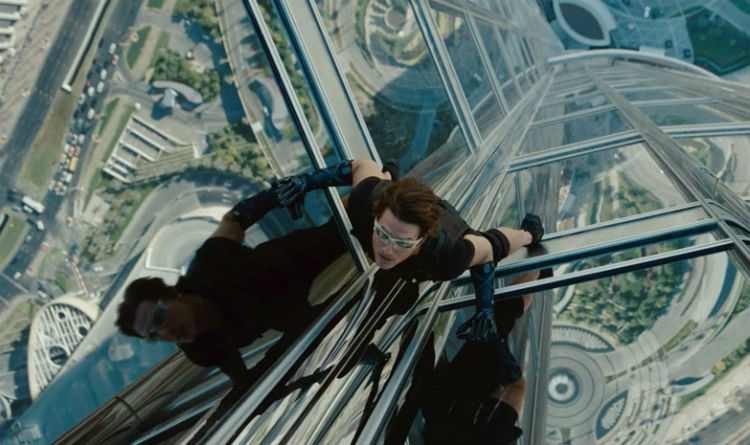 The fourth installment of the spy series is the best yet, a smashing combination of bravura action sequences, comic jousting, and revenge-minded character drama. And it looks spectacular in IMAX.

Tom Cruise returns as Ethan Hunt, a secret agent who begins the movie locked up in an Eastern European prison. Quickly he rejoins former teammate Benji Dunn (Simon Pegg), who has qualified for field work during Hunt’s imprisonment, and Jane Carter (Paula Patton), an agent with a score to settle. Their first mission together is to crack the Kremlin in search of something vitally important to national security. Things go wrong, of course, the Kremlin suffers a mighty explosion, and Hunt’s team is framed for the crime.

As a result, the President orders the entire covert Impossible Mission Force (IMF) disavowed, putting the team into “Ghost Protocol.” They are joined by high-level analyst Brant (Jeremy Renner), who only survives a deadly attack thanks to Hunt.

The mechanics of the plot are set up swiftly and efficiently, initially establishing a clear motive for Carter, and later providing motivation for Hunt and Brant. The film goes easy on the melodrama, however, never forgetting that its main mission is to entertain with outlandish action sequences.

Director Brad Bird, who first came to prominence with the terrific and heartwarming animated picture ‘The Iron Giant,’ subsequently won Academy Awards for his work on ‘The Incredibles’ and ‘Ratatouille.’ While he may seem an odd choice to helm a big-budget, live-action blockbuster sequel, it makes perfect sense if you consider ‘The Incredibles’ as an action movie.

Like ‘The Incredibles,’ ‘Mission: Impossible – Ghost Protocol’ boasts multiple action sequences that are defined by their fluid choreography. We always know who’s involved, where they are in physical relation to each other, and where they are in relation to the geography of the setting. That means the stakes are higher, and it pushes the tension level up, all because we can see clearly what’s happening and we know what will happen if a suspect is lost, for example.

The script, credited to Josh Appelbaum and Andre Nemec (and reportedly based on a treatment by the uncredited J.J. Abrams and Tom Cruise), builds on the spy-chase-grab framework with good team interplay. Unlike previous installments, the new movie places a refreshing emphasis on the importance of teamwork — and on the reality of things going wrong from time to time, and the need to improvise in the field. That gives the movie a more humane grounding, even as the action frequently takes flight into the world of unbelievable fantasy.

Yet it’s all convincing, faux-reality in the service of mass-market entertainment, and it never insults the audience. ‘Mission: Impossible – Ghost Protocol’ is an unadulterated pleasure.

‘Mission: Impossible – Ghost Protocol’ opens today only in IMAX theaters — which is the preferred format — before expanding wide next Wednesday, December 21 across the Metroplex.