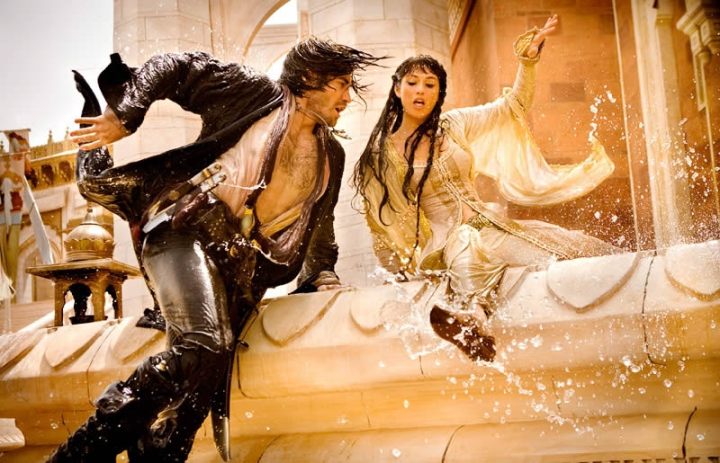 Jake Gyllenhaal, buff and smirking, takes the lead in the Summer blockbuster videogame adaptation Prince of Persia: The Sands of Time, starring opposite Sir Ben Kingsley.   Would that this were good news!  In fact, that combination makes up a trifecta of failure, buoyed by sloppy camerawork, nothing-new-here special effects and a flat, lazy story.  That should be the end of this review, but I frequently try to follow the local word-count requirements, so let’s play through.

Gyllenhaal (stepping down from dramatic roles in films as good as Zodiac and as so-so as last year’s Brothers) plays Prince Dastan, a rakish, athletic fellow who was taken in by the king as a young peasant boy, because he a) had the gall to throw an apple at the royals and b) apparently invented parkour.  See, Dastan likes to dodge about from rooftop to rooftop when chased by man or wall of sand, and can usually extricate himself from danger by timing another series of perfectly-executed jumps.

Dastan’s brothers, two true-blood princes, each have flaws that make them nearly one-dimensional:  Garsiv (RocknRolla‘s Toby Kebbell) is quick to anger and raring to fight, while Tus (A Good Year‘s Richard Coyle)  thinks a little too much, and relies on the counsel of his father and his uncle Nizam (Kingsley) rather than listening to his heart, which apparently is pretty important, because we’re told we should do that about seventeen times.

None of this one-sidedness for Dastan, no.  He is daring, a strong tactician, a ladies’ man and does that leaping thing.  And the thing with his heart.  So when he is framed for the death of a royal, he takes off like a fleeing murderer (because, he claims, he had to, when there was no evidence he’d done anything wrong), and by his side is Tamina, a tempestuous princess and dagger-guardian of the sacred city Tus has just attacked.

(Let’s pause here for a moment of utter obviousness and shoddy script-writing :  Tus and Garsiv have received reports that the sacred city is making weapons and selling them to their enemies, but when they storm the city, they find no such weapons…of mass destruction.   Do you get it yet?)

Dastan and Tamina charge into the desert, Dastan possessing a sought-after ceremonial dagger (“It’s not even very sharp.”) that has the power to rewind time for a minute or so, allowing ill-timed attacks and injuries to be undone.  They must find out who the real murderer is, and why, and prevent the dagger from falling into the wrong hands.  They also must slowly fall in love, because that’s what happens in these films between choppily-edited action sequences.

And then there is the comic relief.  If there is one thing that works in POP:TSOT, it is Alfred Molina as Sheik Amar, an “entrepreneur” who runs ostrich races in the Valley of Souls, where no sane man would go (unless he wanted to place bets on ostriches).  Molina’s timing is perfect, and he makes his scenes far more enjoyable than the film deserves.

Why all the fuss over a PG-13 sword flick from Disney, you ask?  A few reasons.  First, as a cinema enthusiast and an occasional videogame player, I am always intrigued by adaptations of that medium, and want to give them the benefit of the doubt.  See, like comic book adaptations, videogame movies are a wildly uneven genre.  But POP:TSOT feels so unrepentantly sloppy, with special effects that became obsolete as soon as The Mummy left town in 1999, a too-simplistic plot and shuddering, flash-framed action scenes that show very little and allow for no build-up of tension or thrills.

What happened to the action film?  There was a time when the very act of two men fighting, with fists or swords, was a terrific source of entertainment.  Between effects and editing, filmmakers have removed the thrills until it becomes one long, speeding passage through a lens;  no focus, no fun.  And if a film like POP:TSOT can’t be fun, then what is the point?  When no single image in an action sequence is held for more than two seconds, it’s time for filmmakers to go back to school and re-train their eyes.  They need to watch films from any number of decades, and see what thrills can come from a simply-shot scene, one which does not replace sustainable awe and abandon with persistent editing.

It doesn’t help that Gyllenhaal, who up to now has played pretty much every role with his deer-in-the-headlights expression subbing for dramatic intensity (I give Brokeback Mountain and Zodiac a pass because they’re that damn good), decides to play up a faux-British accent and go into every scene with his eyes half-closed, bearing a lopsided grin that seems more like a sleazy pickup artist than a desert scoundrel.

So basically, we have a movie made for children.  And apart from some snakes that might seem a little too intense for the smallest tots, there’s nothing terribly objectionable about the movie in that regard.  It’s just a shame that instead of unadulterated adventure, we get loud and evasive pap.  Prince of Persia: The Sands of Time places producer Jerry Bruckheimer in the unenviable position of having two possible duds in one season:  the mid-Summer Nicolas Cage vehicle The Sorcerer’s Apprentice (also, bless his heart, co-starring Molina), looks jauntier without the benefit of Gyllenhaal’s leaping stunt-double.  It has, according to the trailer, a massive dragon, a robot falcon, and of course, Cage himself.  How can it not be an improvement over this crusty bowl of fermented goat’s milk?

[Prince of Persia: The Sands of Time opens wide in Dallas today.]

One thought on “Review: Prince of Persia: The Sands of Time”