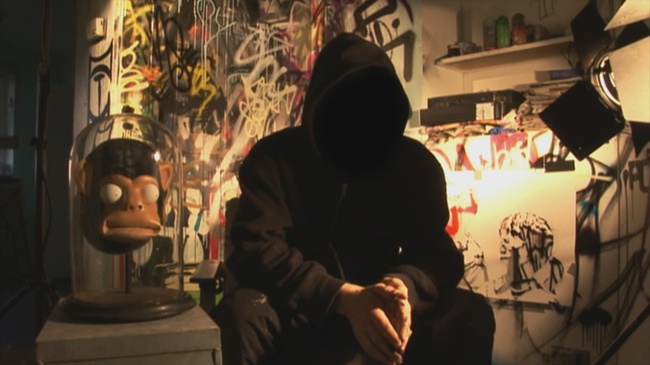 L.A. shop owner Thierry Guetta always carried a camera around, persistently filming his family, friends and customers on a daily basis, saying he felt it captured moments on film that could therefore never be forgotten.  When Thierry realized that his cousin was renowned graffiti artist Space Invader (everyone in the graffiti community, it seems, has some form of nom de tag), he followed Invader on numerous missions throughout the city and became caught up in the world of street art.  Soon, he had filmed thousands of hours of artwork and, claiming he was making a documentary, had access to many of the world’s best artists.  There were only two problems with Thierry’s situation:  1) he was unable to track down globally-renowned artist Banksy, who was considered to be the preeminent one of his kind, and 2) it appeared that Thierry wasn’t making a documentary at all, just collecting hundred of boxes of thousands of video cassettes, never bothering to go back and review footage.  Then one day, he got a phone call, and everything changed…depending on who you talk to, perhaps not for the better.

Exit Through the Gift Shop is nothing if not a guerilla expose of validation in the art world.  Banksy, for example, has a certain kind of validation thrust upon him when he puts on a show (including a live, painted elephant) in the form of collectors’ cash…and a lot of it.  But Banksy doesn’t appear to be as interested in people’s money, as much as tweaking the nose of authority while creating clever condemnations of society, culture, politics and commercialism itself.  Thierry, on the other hand, gathers validation (in the form of his captured images) for no particular reason, but when urged to “become a street artist and put on a show”, he seems to become more interested in the promotion, the marketing and – of course – the collectors’ cash, than in the creation of the art itself.

Exit takes a deceptive tactic in going about its story;  allegedly directed by Banksy, most of the footage is Thierry’s.  After realizing that Thierry is no filmmaker (his own documentary effort is a misguided and painful seconds-at-a-glance mash-up of very little actual footage called Life Remote Control), Banksy takes Thierry’s footage, and then has Thierry’s own efforts filmed, creating what we see.  Yet there have already been suspicions that the whole affair is an elaborate goof by Bansky, though this seems unlikely.  Thierry comes across as so genuinely excited by the prospect of filming the artists and then going on to his own work, that it would be quite a dramatic achievement were it not real.

Assuming everything we’re told is true, Bansky has pieced together an incredible film.  Engaging from the first frames, frequently funny and filled with amazing works of art (from small ceramic Space Invader characters to Shephard Fairey’s famous “Obey” posters – featuring the face of late wrestling legend Andre the Giant – and massive pieces that cover the walls of buildings), the film is more about Thierry than Banksy, though the latter gets enough coverage to appease his fans.  British actor Rhys Ifans provides straightforward narration that helps tie all the footage together, but it is Bansky himself (always with face obscured, sometimes only shot from the back for secrecy) who really punctuates everything that is shown.  He makes it clear, even if he disguises it politely, that he doesn’t think much of Thierry as filmmaker or artist, yet he seems rather taken with the cameraman’s outsize energy and determination.  Even when Thierry becomes “Mr. Brain Wash”, Banksy provides a telling quote for his show, which Thierry splashes across the side of his soon-to-be gallery, a badge of honor.

Exit Through the Gift Shop will likely have a very limited release across the United States, so anyone interested in street art, cinema, documentation or the breaking of boundaries for the sake of the act is urged to rush out and see the film.  It is a rare display of a cultural phenomenon that otherwise would be hard to experience, unless you see it being done first-hand, on any of a million walls across the globe.