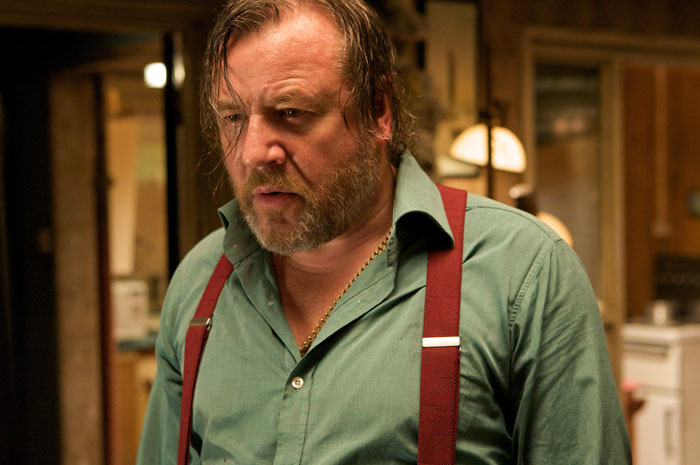 The writers of the brilliant and profane Sexy Beast have returned with a film that provides a far less fluid examination of violent human reactions; they did, however, remember to bring their thesauruses of vulgarity.  44 Inch Chest is about a man who, upon learning of his wife’s improprieties, allows fury to envelope his better judgment and his four best friends to drive him to the site of retribution.

The film begins with the remnants of rage: a living room torn apart, pictures smashed, stereo components tumbled to the carpet.  And in the middle of it all, a body lies unmoving.  By the end, a man walks calmly down a street, resigned to his final decision.  But what goes on in between these two scenes is mostly talk, sprinkled with a few flashbacks, all of it soaked in anger and resentment.

Colin Diamond (Ray Winstone) is bleary-eyed and broken when told by wife Liz (the stunning Joanne Whalley) that she’s seeing someone else.  And he reacts, first with harsh words and then a raised hand.  Jump ahead several hours, as a van containing Colin, thuggish Mal (Stephen Dillane), gentler Archie (Tom Wilkinson), polished man-hunter Meredith (Ian McShane) and Old Man Peanut (John Hurt) pull up to a small restaurant, where they jump out and nab the young waiter with whom Liz has been involved.   They take him to an old hideaway where they proceed to drink, talk, threaten and talk some more.

And that’s pretty much all that happens; the film is built on a steady stream of invective-fueled diatribes and reminiscences that barely shape the men as characters but definitely don’t dismiss or support Colin’s actions.  Like Mamet, the writing team creates an enthusiastic rhythm out of machismo and disdain.  And that jazz-like, unsteady flow works wonders with the thin material.  Colin is a man of limited emotional gaps; he swings sharply from enraged to near-catatonic to blubbering, wronged spouse.  Yet when his decision is made, everyone leaves and Colin simply walks away.  There is no judgment of the men, no rebuke for their behaviors.  And the film rather abruptly ends.

Rough parlance requires actors of sturdy metal, and the casting of 44 Inch Chest is dead-on. Winstone has made a career of imposing, blustery men who carry big sticks, and frequently use them. But with Colin he gets to emote in ways that sap his ability to threaten and leave him a rather sad figure. Ian McShane has the oily, unnerving presence that he brings to almost every role he plays, but here he gets to tweak Meredith’s predatory homosexuality with some wicked glee.  When we first see him, he almost breathes in the naked man on his sofa, but is clear to remind his friends in no uncertain terms that he has no emotional attachments to his prey.  Wilkinson is first seen doting on his elderly mother, but switches to a more gruff persona when with his buddies.  Dillane doesn’t get as much to do as the rest of the cast yet still seems to have marked his territory.  And John Hurt infuses Peanut with a crusty anger; despite how much he loathes everything around him, he seems at peace with his friends’ choices in life.

44 Inch Chest is more of a joy for anyone who has gotten a thrill from how words fly off the screen rather than any action that takes place upon it.  It is a straight-forward, simplistic tale, one that doesn’t offer much, and definitely nothing that will catch you off-guard.  But the actors and dialogue are worth taking in.