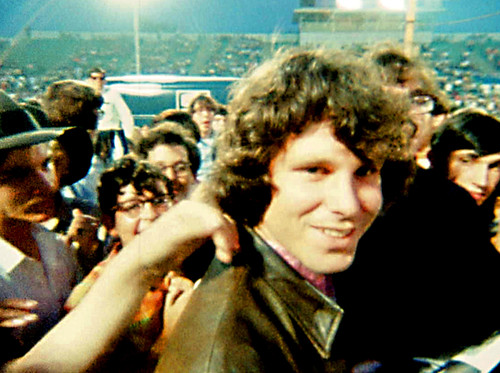 Tom DiCillo’s When You’re Strange gives a lopsided view of ’60s- and ’70s-era rock band The Doors, and a cursory one at that.  The film seems more about the gradual disintegration of front man Jim Morrison rather than the band as a whole, as it persistently circles back to arty footage of Morrison travelling alone through the desert (these scenes taken from Paul Ferrara’s 1969 film Hwy: An American Pastoral) that only serve as a stilted reminder that drug culture doesn’t age well.  When You’re Strange does benefit, however, from a seemingly endless supply of archival footage that suggests the band members were never far from cameras.

The film posits that each of the band members were schooled in unique musical styles (classical, jazz, flamenco) and that these merged to help create their off-kilter sound.  But it was the stage presence of their lead singer, and his increasingly drug-fueled antics, that created a rift repeatedly for the band with producers, audiences and ultimately, the authorities.

One of the major problems with DiCillo’s film is that it constantly drives home the point that the band was born out of the tumult of the ’60s, which in and of itself seems a little clichéd.  Yet the footage of major events from those years has been seen in so many different films about social, political and cultural issues that it has lost some of its impact.  Very little is said about Morrison’s influences, which is too bad because you get the impression his poetry and lyrics came from a very deep and personal place that just isn’t examined here.

The other band members are given little attention;  we’re told they learn quickly how to play along when Morrison starts to go off-script during concerts, but we don’t get to know them as individuals.  And on the whole, the film throws information at the viewer with a furious pace, then slips back into some concert or desert footage.  It feels rushed yet strangely empty.

Which is too bad, because The Doors sounded great.  By turns bluesy, dark, and hard-rocking, their songs were all over the place musically but kept you riveted. The band didn’t have a bass player, leaving keyboardist Ray Manzarek and drummer John Densmore to supply impressive foundations.  Robby Krieger’s “Touch Me”, from the troubled recording sessions of the album The Soft Parade, was borne upon near-surreal string and horn sections.  And Morrison’s lyrics were edgy – sometimes subversive – poetry. Musically, the film is a pleasant reminder of what your next iTunes purchase should be.

Sleepily narrated by Johnny Depp, the film is otherwise made up exclusively from footage shot during concerts, recording sessions, while travelling and at home.  When You’re Strange is probably mostly for the hardcore fans, as it doesn’t cover any new ground and can’t be said to be particularly vivid filmmaking (it doesn’t really require a skilled director as much as an inventive editor).  But it does supply a succinct opportunity to reminisce with some really great songs.