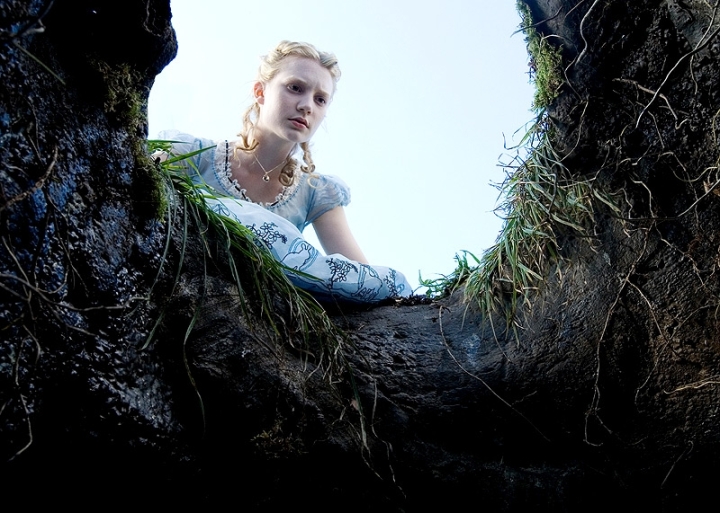 Tim Burton makes a habit of imbuing his films with a dark, disturbing, yet often child-like sense of wonder, whether they serve as comedy (Pee Wee’s Big Adventure), drama (Ed Wood, Big Fish) or animation (The Corpse Bride).  Only his musical adaptation of Sweeney Todd: The Demon Barber of Fleet Street feels a little too grim for its own good, but when human meat pies are in play, that might be hard to avoid.  And the director has had a rather low percentage of outright failures; while Mars Attacks was simply lacking, Burton’s remake of Planet of the Apes is his only laughably bad film.  Alice in Wonderland, then, poses an interesting puzzle: a somewhat (but not completely) visually arresting film, it falters when trying to convey the tone that has served him so well.  Yet it also displays some of the most embarrassing work by two of his favorite actors, Johnny Depp and wife Helena Bonham-Carter, as well as a shockingly scattered, sideways view of the characters and events in Lewis Carroll’s Alice’s Adventures in Wonderland and its follow-up, Through the Looking Glass.

In Burton’s story, Alice is a pale young woman who has suffered from the same nightmare for the better part of her lifetime.  Her father, an adventurous businessman who set out to create trade routes to unknown lands, has been deemed lost, and Alice’s mother decides she must marry a Lord to establish her position in life.  The only problem apart from the possibility that Alice, in modern medical terms, might just be psychotic, is that she bears the adventurous heart, humor and anti-establishment piece-of-mind of her father…traits which no one else views very fondly.  That, and the man she is to marry happens to be what Monty Python would have termed a world-class twit.

When asked by her potential step-mother “Do you know what I can’t stand?”, Alice replies: “Decline of the aristocracy?”  That kind of quick, clever humor is in short supply in the film.  Instead we are treated to sight gags and garbled, bungled accents.  A pointed comedy about class seems like an obvious direction for such fantastical material, but Burton has opted for a lame adventure tale of a young girl who is foretold to kill a dragon, in this case the dreaded Jabberwocky of Carroll’s poem from Through the Looking Glass.

Two of Alice‘s characters have speech impediments…this should not be a deal-breaker, but you would think one would suffice.  Bonham-Carter’s Red Queen doesn’t get all her R’s right; this isn’t as critical as she spends a good deal of her time yelling, mostly some variation of “Off with their head!”  Depp’s Mad Hatter, supposedly a sympathetic character and possibly a hero, is actually disturbing to look at, a lisping, creepy fellow who occasionally switches to an at-times unintelligible Scottish accent.  Why? Because its bonkers, that’s why.   As The Knave, Crispin Glover tries really hard, but what his head gets right is undone by his ungainly CG-warped body, which moves as if it is fighting to go in opposite directions at once.  (And in Burton’s film, The Knave does not steal the Red Queen’s tarts…that crime is placed upon a hapless Frog Footman.)

Like the Frog and Fish Footmen, some of the character models work nicely.  The Cheshire Cat, dissolving into swirls of mist and casually swooping in every direction, is a really excellent example of what animators can do with otherworldly material.  Tweedledee and Tweedledum are sweetly portrayed by Matt Lucas, whose face barely fits in the center of their outsize CG heads.  And many of the other anthropomorphic characters are terrifically voiced by some of Britain’s finest (Stephen Fry, Michael Sheen, Alan Rickman and Timothy Spall).  The overall look of the film is admirable, but often the vistas are surprisingly dull, both in their color schemes and visual impact.  Nothing is quite as dynamic in the film as you would hope.

We are reminded over and over again that time spent in Wonderland (which the occupants therein seem to pronounce “Underland”) is just Alice’s dream.  Yet when she finally climbs out of the rabbit hole to face her real-world antagonists (her long-since destroyed clothes in perfect condition), it’s curious that she should bear the mark of one of the many figments of her imagination.  That Burton should hint that maybe it all does exist, and not just in Alice’s tormented head, seems a bit of a cheat on top of his already poorly-subverted use of Carroll’s material.

But forget all those English Lit 101 debates: when Depp does a brief electro-boogie at the film’s end, the embarrassing, wrongheaded nature of the film is fully exposed.  The few winning aspects of Alice in Wonderland just can’t carry the burden of the whole, goofy affair.