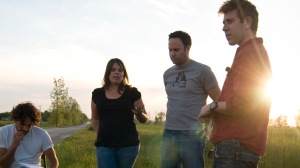 The nice thing about Don’t You Forget About Me, the new documentary on John Hughes, is that it comes from a loving, sweetly reminiscent place in the filmmakers’ hearts.  This is impressively consistent throughout the observations and recollections of the writer/director’s films by a large number of actors, crew members and fans.  What doesn’t work, what truly grates upon the viewer’s nerves, is how sloppily the novice filmmakers go about getting their most important interview: Hughes himself.

Hughes had his greatest successes in the mid-Eighties, with teen films such as Ferris Bueller’s Day Off, The Breakfast Club and Sixteen Candles.  His takes on teen life, with their awkwardness and zits-and-all realism, balanced by solid humor and a touch of pathos, were not only popular and effective, but 25 years later have remained successful with a new generation of kids.  Filmmakers Kevin Smith and Jason Reitman both profess that their films wouldn’t have been possible if they hadn’t been exposed to Hughes’ brand of honest, likable cinema.  But Hughes dropped out of sight in the early Nineties, and never did much in the way of interviews or appearances before his death in August of 2009 (after this film was completed).

The four documentarians keep reminding themselves and the audience that they’ve been at this project for two-and-a-half years, yet in all that time, and for all the interviews they’ve amassed, they seem to have never considered planning ahead to get through to Hughes, as they drive to Chicago in search of his home.  Their big idea:  walk up to the reclusive director’s front door and just ask if they can talk to him.  It comes across not only as amateurish but ridiculously naive.  And by focusing almost half the film on their stumbling efforts, they make the worst mistake of all: spending more time in front of their camera than their subject.

There are some surprising stories amidst the general show of admiration.  Gedde Watanabe (Long Duk Dong in Sixteen Candles) admits he was just a guy from Utah, and had to ask a bilingual friend for tips on how to speak with an accent.  He didn’t tell Hughes he was an American when he finally auditioned.

While many people are interviewed, there are some notable absences:  Jon Cryer (Ducky) and Anthony Michael Hall (clearly a Hughes’ favorite, he played Candles‘ Farmer Ted, Club‘s The Brain and Weird Science‘s Gary, among others) are nowhere to be found.  And it’s eerie to see how some of the actors look over two decades later;  Andrew McCarthy, for example, appears to have stepped through a door from 1989.

Even if Don’t You Forget About Me had been a more straightforward clip-and-interview reel, it would have been a winning one, by simple virtue of Hughes’ admirable work and the goodwill he engendered in fans and filmmakers alike.  As it stands, it is by turns heartwarming and frustrating.

(Don’t You Forget About Me is currently available on DVD and Netflix’s “Watch Instantly” service, which can be viewed via an XBOX 360.)