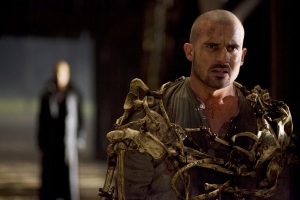 Blood Creek is the kind of smart independent film that suffers at the hands of Lion’s Gate for the simple crime of its genre roots.  That it is directed by Joel Schumacher and has crept onto DVD with almost no fanfare says more about the filmmaker’s downward trajectory in Hollywood and the distributor’s handling than the film’s quality.  Despite an elegant and dread-filled opening sequence (filmed in a gorgeous, muted black and white) and being marketed as a horror film, Blood Creek is a well-paced thriller, trafficking in suspense more than scares or gore (though it is not without the latter).

Evan (Henry Cavill) is an overworked EMT who cares for his belligerent, sickly father.  Two years earlier, Evan’s brother Victor (Dominic Purcell), a decorated soldier, went missing.  Evan seems only mildly surprised when Victor shows up one night, shaggy and covered in blood.  Seeking Evan’s help without the benefit of explanation, the two set out into the wilderness until they come across an unassuming farmhouse.   Victor’s military execution runs afoul of unexpected complications and bad timing, and then things become complicated.  Let it suffice that mystical rune stones, Nazis, farm animals and a lunar eclipse do not mix well.

Blood Creek is a top-notch film, an exercise in small, simple elements that add up to a successful whole.  And poor, can’t-live-down-Batman & Robin Mr. Schumacher proves that a filmmaker’s work doesn’t need to bear the same flourishes from movie to movie.