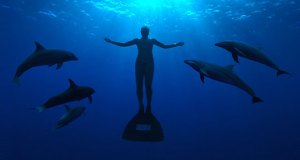 Louie Psihoyos’ guerilla documentary The Cove focuses on a team of activists setting out to obtain evidence of Taiji, Japan fishermen employing horrific methods when catching dolphins.  The film swings sharply between gorgeous shots of natural settings and underwater activity, interviews with activists, health professionals and International Whaling Commission members, and the stunning footage of what really happens in a Taiji cove where dolphins are systematically slaughtered for their meat.

Ric O’Barry, a former dolphin trainer who worked on the television show Flipper, has spent the last 35 years speaking out against captive cetaceans and has undertaken a number of rescues.  Frequently placing himself in harm’s way, O’Barry has repeatedly aggravated local fishermen and authorities as well as incurred the wrath of political and corporate entities that benefit from dolphin sales.

While the documentary’s main message is the cruelty toward and slaughter of the dolphins, there is also considerable evidence that once killed, the dolphin meat has a level of Mercury toxicity 10,000 times greater than “allowable” levels, thus making it a potential danger if used in, for example, a nation-wide school lunch program.

The Cove is striking in many ways, and deserving of greater attention than lip-service placement on a number of Best Of 2009 lists.  Considering the impacts alleged in sister films Food, Inc. and Collapse, the season of documentary condemnation rolls on.

(If you want to help, or just want to calculate your mercury intake, go to http://www.takepart.com/thecove .  The Cove is currently available on DVD.)