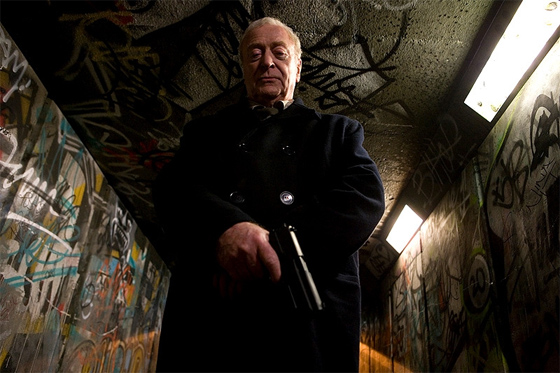 Harry Brown begins with a jarring, grainy video of a gang initiation: a young man takes a hit from a pipe, is handed a loaded gun, and rides off with another member on a motorbike to create havoc.  When a stray bullet takes down a single mother pushing a stroller, they make a run for it, but don’t get very far.  Such is life on “The Estate”, a series of London apartment blocks where youth gangs run rampant, dealing drugs and ruthlessly beating down anyone who comes near them, while low-income families and old-age pensioners remain locked indoors for their own safety.  Inserted between these early images, the tiny, plain font of the film’s opening credits leaps out at you, as jarring as the action on screen.  Harry Brown is a small, sturdy film that – despite its lean story and uneven pace – makes a firm impression.  It also provides star Michael Caine the opportunity to play a sympathetic but tough character, and his performance should lead to recognition if the film’s economic proportions allow it to be remembered by year’s end.