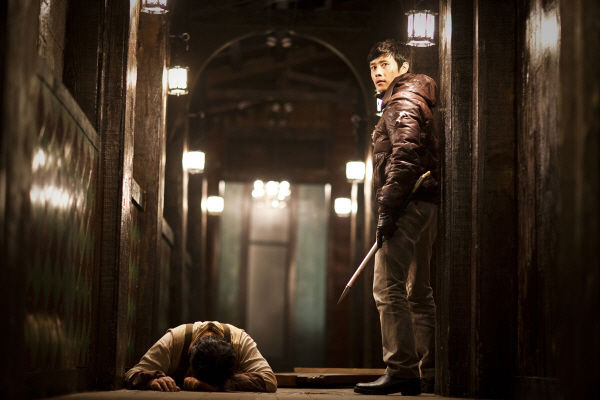 Korean revenge and all manner of American and International features and docs are on the docket. END_OF_DOCUMENT_TOKEN_TO_BE_REPLACED

Ah, the runner stumbles even in film review.  After what had been an almost perfect week of movie choices at the 2010 Dallas International Film Festival, I found myself wondering what had happened in those final moments, as I closed out my experience with one of the biggest (and most surprising) failures of the fest.

Perhaps I should have known it couldn’t be that good.  DIFF had played out like something from a dream, cinematically:  I had very little foreknowledge of most of the films I saw, yet was absolutely blown away by a large majority, which just doesn’t seem statistically possible.  The few films I felt didn’t cut it were at least well-made.  The science-fiction tale Earthling just didn’t know how to explain away its promising theories, and felt awkward in its execution despite a great sense of unease that recalled Lynch and Cronenberg.  And the grueling you-won’t-go-to-the-prom-with-me-so-I’ll-drill-a-hole-in-your-head horror film The Loved Ones just became so deadening in its relentless monotony that you wished the amusing subplot would have gotten more screen time.

END_OF_DOCUMENT_TOKEN_TO_BE_REPLACED

A terrific first full day of the 2010 Dallas International Film Festival is capped off with a colossal dud.

Lu Chuan’s City of Life and Death is such a powerful piece of cinema that it is almost unbearable, and I mean that in the best possible way.  Recounting the events of 1937 Nanjing, at the height of the Second Sino-Japanese War, the film portrays action scenes with an immediacy that is striking, atrocities with a detachment that can leave you shaken, and yet still handles heartbreaking intimate moments with a delicate touch.

END_OF_DOCUMENT_TOKEN_TO_BE_REPLACED

The 2010 Dallas International Film Festival got off to a rousing start as the Angelika Dallas center was host to multiple showcases (and a few celebrities, too).  Some of the night’s screenings went off without a hitch (see below), while others hit technical snags:  apparently both screen and projection issues marred the presentation of Bill Cunningham New York.  But happy faces and free booze can wear down the hardest hearts, and everyone seemed to be having a great time.