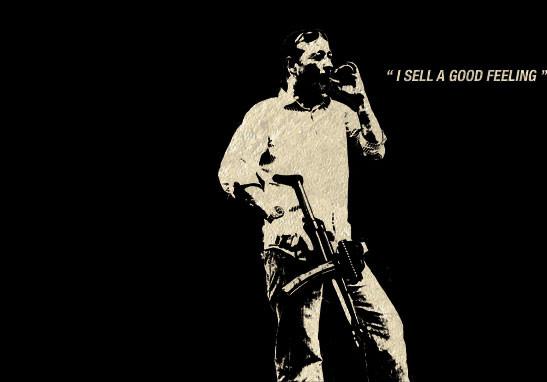 Fidelis Cloer doesn’t sell cars, he sells “a good feeling.”  A self-proclaimed profiteer, the German businessman creates armored cars that don’t look like tanks, and he sells them to corporations, governments, dignitaries and powerful men who want to avoid being shot or blown up in their own war-torn countries.  Cloer gravitates to regions like Iraq and Afghanistan not because business is booming, but because those countries are; war is an inevitable boon to his trade.   Cloer is so matter-of-fact about his product that the documentary Bulletproof Salesman would feel like a very practiced sales seminar if it weren’t for some of the queasy footage interspersed between him and the filmmakers’ cleverly-presented statistics.

END_OF_DOCUMENT_TOKEN_TO_BE_REPLACED

“Runnin’ out of choices, really.”

19-year-old Michael Peterson attempted to make a name for himself by committing the 1974 robbery of a local post office, and for the little more than fifty pounds he netted, he was sentenced to seven years in prison.  Of the total 34 years he served by the time Nicolas Winding Refn’s film was made, 30 were spent in solitary confinement due to Peterson’s reputation as “the most violent prisoner in Britain”.

END_OF_DOCUMENT_TOKEN_TO_BE_REPLACED

The nice thing about Don’t You Forget About Me, the new documentary on John Hughes, is that it comes from a loving, sweetly reminiscent place in the filmmakers’ hearts.  This is impressively consistent throughout the observations and recollections of the writer/director’s films by a large number of actors, crew members and fans.  What doesn’t work, what truly grates upon the viewer’s nerves, is how sloppily the novice filmmakers go about getting their most important interview: Hughes himself.

END_OF_DOCUMENT_TOKEN_TO_BE_REPLACED

Downloading Nancy is one of the few films in recent memory that I would label repellant.  With Maria Bello, Jason Patric and Rufus Sewell, the film should at least have garnered some kudos for acting skill, but it’s an embarrassing effort.

END_OF_DOCUMENT_TOKEN_TO_BE_REPLACED 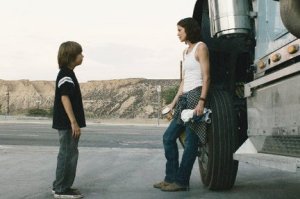 Trucker starts off with a clever reversal of a familiar scene: two lovers in a roadside motel part ways after rigorous, anonymous sex, one asking when they can see each other again, the other brusquely walking away.  The twist: Diane Ford (Michelle Monaghan) is the one leaving a poor love-struck local man behind.  Diane’s not cold, she just knows How Things Work: she has a date, time and destination where she needs to be to get paid, and that’s all she knows.  Diane is an independent truck driver who’s just recently paid off her rig, and when she’s not making multiple runs across country, she’s taking comfort in the awkward friendship she maintains with Runner (Nathan Fillion), who doesn’t let his marriage get in the way of Seventies Dance Night at the VFW.

END_OF_DOCUMENT_TOKEN_TO_BE_REPLACED

Robert Siegel’s Big Fan has only one thing going for it: a brave performance by comedian Patton Oswalt.  But because Oswalt plays such an unflinchingly sociopathic loser, the film becomes hard to care about. Paul Aufiero (Oswalt) is little more than a man-child with a pathological interest in the New York Giants’ performance.   He and his friend Sal (the terrific and underused Kevin Corrigan) go … END_OF_DOCUMENT_TOKEN_TO_BE_REPLACED