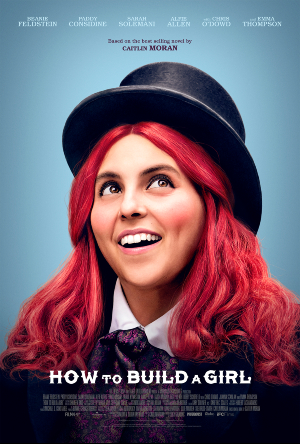 There’s a pivotal scene in Coky Giedroyc’s How To Build A Girl that asks the viewer to suspend disbelief when 16-year-old music critic Dolly Wilde sits down for her first real interview with a thriving British pop singer. She breathlessly asks three or four inane questions (i.e. “favorite Beatle?” and “if you only had one pound to spend in a sweet shop what would you buy?”), and before he can answer any of them, he decides to whisk her away where they spend the afternoon together listening to music on the street before he ensconces her on the side of the stage for his sold-out show later that night.

This is not a teenage pop dream, but something that actually happens to Dolly (Beanie Feldstein) alongside a series of other events that observes her grow from high school outcast to lauded pop magazine writer in the matter of months. And one’s satisfaction with the overall film will depend on how easily one falls for her sweetly designed good fortunes. It worked for me, especially since Feldstein again embodies a young girl so full of life and zest that it becomes infectious.

Rather a meteoric rise and hard fall than an outright coming-of-age story, How To Build A Girl begins with Dolly — before applying that self appointed moniker — simply as Johanna, the oldest sibling in a large British Midlands family who finds more comfort in the school library awash in her own heated fantasies than with a group of friends. After winning a poetry competition for a local television station, and then ultimately crashing amidst her own stage fright once the camera zooms in on her, Johanna takes a stab at criticism when she submits a review to a popular music magazine. It’s no doubt ironic that she submits a zinger of a review for a song from the play “Annie.”

Getting an interview and then through her own sheer will, Johanna lands the part- time gig and finds herself more popular than ever as her reviews begin to resemble a pubescent Hedda Hopper, more infamous for the sharp comparisons and witty put-downs she applies to the bands.

Before long, her column size isn’t the only thing that grows. Her self-confidence blossoms as well, as anoints herself the aforementioned Dolly Wilde through her exaggerated dress and swaggering personality that resembles the titanic personalities of the bands she covers, rather than the feeble conscientious objector of the scene. In becoming part of the scene, How To Build A Girl naturally sets young Johanna up for a stronger crash landing in both her personal and professional existence.

Based on a novel by Caitlin Moran (who also penned the screenplay), How To Build A Girl claims to be based on a “tru-ish” story. It’s certainly hard to tell where the real and where the fictional collide, especially since so much of the film feels like the escapades of someone living in their own starstruck dreams. Perhaps the impoverished, blue-collar setting of the Midlands and Johanna’s large family (rounded out by comical and touching performances by Paddy Considine and Sarah Solemani as her struggling parents) serve as anchors for the truth.

Or perhaps Moran’s own highly-lauded, risk-taking works exploded from the same sense of get-me-out-of-here-desperation that young Johanna feels in the beginning of the film. It’s probably not a coincidence that Johanna dots her bedroom wall with pictures of famous people from all over the literary world. including Freud, Jo March, Maria von Trapp and Sylvia Plath, and they actively converse with her, shutting up only after she paints over them with her own magazine clippings, as if the trashiness of the words is too much for them. I’m sure there’s a strong sense of self-analysis there.

Regardless of what’s true or not, How To Build A Girl revels in the aspirations of a talented writer who breaks free and goes after what she wants. It may be fictional that anyone could walk into a well-established publishing outlet, get themselves laughed out, then later returning and landing the gig of a lifetime, but that’s exactly what happens here. Sometimes the creaky plot mechanics feel a bit too saccharine, but How To Build A Girl succeeds because, well, the wish of everybody who puts pen to paper and tries to formulate thoughts and words for the benefit of themselves and others hopes this same opportunity will happen to them. In the case of Johanna, it does and sometimes (especially now) we all deserve something sweet and worthwhile.

IFC Films will release How To Build A Girl on Friday, May 8, 2020 at the Galaxy Drive-In, located in Ennis, Texas, plus all Video On Demand platforms.