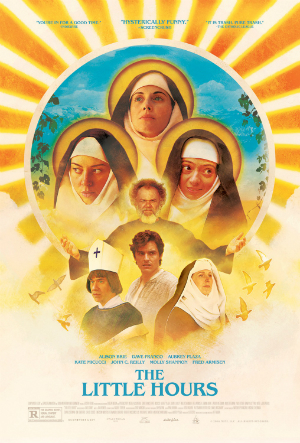 The year is 1347. The setting is a pastoral Italian convent inhabited by a select few nuns and a soft-spoken priest.

Against a very 1970’s opening sequence, complete with bright yellow titles and a soft tune that would be right at home in the films of Michael Reeves or Jess Franco, The Little Hours opens as nun Fernanda (Aubrey Plaza) leads a lost donkey home and then gently attains to her chores, fully clad in a nun’s habit.

It’s only when a second nun (Kate Micucci, so great in Don’t Think Twice) interacts with Fernanda in the very next scene that Jeff Baena’s film reveals its anachronistic intentions and begins its slow and highly enjoyable trod down an irreverent path. Arguing in ‘modern-speak’ with a tinge of emo/California Valley girl hesitancy (basically their natural voices), the two nuns soon channel their bored chatter into a vulgar rant against a passing male convent worker. Expletive laced and ferocious, it’s a moment that establishes the witty and bawdy tone of a film that mixes youthful apathy, sexual repression and mordant strikes at organized religion into a seamless example of tightly wound comedy.

Also suffering at the stifling restrictions of the convent is a third nun, Alessandra (Alison Brie). More attuned to her spiritual dedication than the others, Alessandra is the most pious of the three… that is until her father arrives to tell her she cannot return home because of financial difficulties.

Falling into the fold, Alessandra slowly loses her faith, helped by Fernanda and her smuggled-in friend (Jemima Kirke) who not only introduces the girls to wine and late night, dorm-room style clandestine drunkenness, but lesbian tendencies and a parlance in witchcraft.

Struggling to keep the three younger nuns in check becomes a much bigger problem when the priest (John C. Reilly in yet another one of his aloof comedic turns) decides to hide a dashing young man in the convent as a worker. The man (Dave Franco) is on the run from a local land baron (Nick Offerman) after sleeping with his wife. Add this virile figure into the mix and one can see the excess that The Little Hours explores.

Also written by Baena, The Little Hours owes much to the comedy of Monty Python or the sanctimonious subversion of Luis Bunuel and Pasolini. Loosely based on a couple of stories from “The Decameron,” it doesn’t make much sense to try and make literal connections. The film is its own beast. Deftly paced and breathlessly acted by all involved (especially a late appearance by Fred Armisen that had me in stitches), it’s a film that understands its purpose of fully formed characters and well designed situational laughs.

Like the recent Rough Night and so much comedy since the evolution of the Judd Apatow/Todd Phillips variety (of which I’m a fan of select ones), modern comedy has lost its sharpness. Seemingly derived from the ashes of improvisational acting and slap cut into a herky-jerky mix of reaction shots and filmmakers unsure of when (or how) to reign in the action in front of them, the films suffer from an overarching theme of mindless scatological jokes and transplanted comedy club routines.

When “scripted” comedy is done right, it just zings. The Little Hours zings. The way Aubrey Plaza meets most reactions with her expressions…. the stammers and stutters in conversation that belie a true understanding of the awkwardness of the situation… and especially the timing of several appearances throughout the film that not only underscore the exaggerated tempo of the whole affair but maintain its cheeky displeasure with the medieval age as a de-stabilizer for enlightenment.

All of these moments make Baena’s The Little Hours a supremely funny film that understands humor isn’t an organic thing that can be slapped together. It takes patience, the right people and a belief in restraint, even if one is watching a film about the intersection of religion and witchcraft. I suppose that’s yet another weirdly infectious way The Little Hours succeeds.

The Little Hours opens in the Dallas/Fort Worth area on Friday, July 11 at The Magnolia Landmark Theater.