Chris Smith’s one-man documentary Collapse, which can be summed up as dire and immediate, features journalist Michael Ruppert spelling out how fossil fuel use has tied the knot on civilization.  It is the most powerful and frightening film that no one saw last year, and its release on DVD comes quietly, but hopefully will make it more accessible to a public that likes to turn its back on bad news. 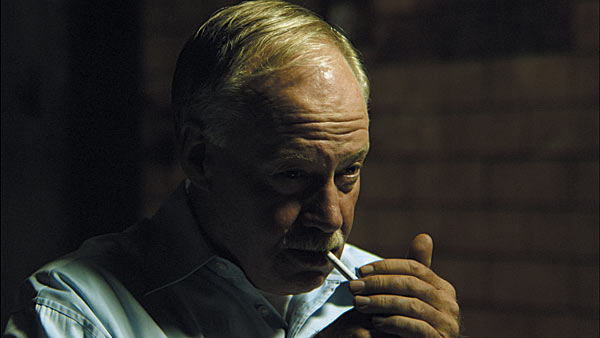 Smith had set out to do a feature on CIA involvement in drug-smuggling operations in the 1980s, and spoke with whistle-blower Ruppert, an alleged source.  But once they started talking, Ruppert made it clear he had bigger, more pressing things weighing on his mind.  So the director sat Ruppert in a room, asked him questions, and let the man talk.  That’s all you get, a film of a quiet, rational man explaining how oil dependence has impacted the supply of electricity, food growth and consumption, travel, war, finance…seemingly every aspect of our lives.  But more importantly, how the concept of peak oil shows that we have exceeded the usage to such a degree that now, there is no turning back.

Ruppert’s claims reach back to his childhood, as he grew up with parents who were deeply embedded in the country’s national security system.  He admits to having a “naive belief” that he could change governmental systems he disliked from the inside, and as a young man became a police officer with the LAPD.  While working in South Central, he was informally approached by the CIA to work for a group that was smuggling drugs into the U.S., but when he declined “that’s when people started shooting at me.”

Using a policeman’s investigative process, Rupert became a journalist and delved into issues that seemed to feed into what would eventually become his primary cause:  peak oil.  “There is nothing anywhere that will replace the edifice created by fossil fuels.  Nothing.”  He explains that oil is everywhere:  seven gallons can be found in every tire;  products from toothpaste to household appliances are made of oil;  all plastics are oil.  And in 2008, there was a 9% decline rate in peak oil (the concept that oil production has reached the point where we have used half of the unreplenishable resource), a rate that cannot be off-set.

Ruppert goes further and explains that the war in Iraq was unnecessary if it was about oil, because the recoverable oil in Iraq would cover roughly two weeks of usage given the world’s current rate of consumption.  He also offers that, were the general public aware of the contents of currently classified energy reports, “we’d be building scaffolds to hang them (the Bush administration) from.”

But the years of effort have taken their toll on Ruppert.  Retired, and living on what he can manage, he says his dog and his love of music keep him going, but the weight of all this knowledge is emotionally oppressive.  At one point in the discussion, he breaks down;  it must be damning to know where we’re headed and not be able to do anything about it.

Smith’s film is superb and yet haunting in its frankness.  One hopes that, as part of the public record, discussion of the information found here will help impact the course of events.

It’s almost embarrassing to mention these films after Collapse, but here goes.

When In Rome – Kristen Bell in a rom-com about a go-getter who finds herself chased by numerous suitors after taking coins from a fountain in Italy.

The Book of Eli – Denzel Washington as a post-apocalyptic survivor on a mission;  Gary Oldman as his adversary thanks to a possession Washington will not share; and brought to you by the Hughes Brothers.  The film is solid and wraps up in a surprisingly hopeful fashion.  Worth watching.