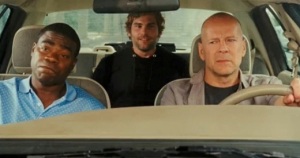 I’m torn about how to approach a review of Cop Out.  If Kevin Smith directed an intentional throwback to 80’s buddy/cop movies, he certainly got the flavor of it.  The dissenting, loud-mouth cops who are always playing against the rules;  the captain sitting at his desk calling them out for their disruptive behavior on the job;  the cops’ domestic issues encroaching on the case;  the three-note synthesizer score and overly-clichéd song choices…all of these elements are in there, along with a healthy dose of laugh-out-loud humor.   But is that Kevin Smith’s doing?  Much has been written about how this is Smith’s first “director-for-hire” job, filming someone else’s script, and clearly it is a more action-oriented effort than Clerks, Mallrats or Chasing Amy.  But the question remains:  what if it wasn’t intentional?   The kudos simply can’t go to Smith on this one, though most of the blame can.

Bruce Willis, who wears the cop role like an old shirt, seems very comfortable casting sideways glances and ironic smirks at every other joke.  The truth is, Willis has yet to be in a film where he isn’t utterly watchable, no matter how repetitious it may seem.  Tracy Morgan, on the other hand, simply cannot act.  He can be silly and manic and sometimes very, very funny.  But just as each Bruce Willis role tends to become “Bruce Willis as…“, Tracy Morgan is again playing Tracy Morgan as a dopey, mugging guy who here happens to be a cop.

Seann William Scott, who looks like he rolled out of bed to play parkour-enthusiast and low-level thief Dave, is the catalyst for the film’s funniest scene, a protracted discussion in a police car about whether Morgan’s on-screen wife is cheating on him.  Their back-and-forth riffing seems completely ad-libbed, but is so seamlessly carried out that one assumes it was scripted, right down to a priceless Bugs Bunny/Daffy Duck reference that is one of the funniest throwaway lines I’ve heard in years.

Jimmy Monroe (Willis) and Paul Hodges (Morgan), NYPD detectives, are long-time partners.  Immediately you know this is a fiction:  Paul is so inscrutably silly that you wonder how he has managed to find his way to the station each day, let alone stay alive for years on the force.   Jimmy’s daughter Ava (Michelle Trachtenberg) is getting married, and Paul isn’t comfortable allowing smarmy step-dad Roy (Jason Lee) to pay for her dream wedding.  He decides to sell off a prized baseball card worth twice the cost of the ceremony.  But Dave robs the collector’s shop while Jimmy lies tazed on the floor; Paul stands outside unaware as he tries to track down his stunningly pretty wife Debbie (Rashida Jones), who he believes is having an affair with a “monocle-wearing” neighbor.  In tracking down the card, Jimmy and Paul become embroiled with a local dealer named Poh Boy (Guillermo Diaz), who is looking for a stolen Mercedes and the priceless loot inside.

Some likable actors show up in Cop Out, but aren’t allowed to do very much.  Diaz plays yet another in a long string of seething criminals, but this time doesn’t  do much more than scowl.  Kevin Pollak’s priceless deadpan is given little screen time opposite Adam Brody as a pair of detectives out to nab Poh Boy.  Brody seems to be playing a cop who is playing a cop from a clichéd buddy-flick from the 80s.  So give him credit for trying.  Jones is gorgeous, and appears to be having fun in a fantasy sequence as Paul imagines her interactions with the neighbor.

But when you get past the actors and the jokes, what you’re left with is a film that technically feels so unenthusiastic that you have to wonder if Smith’s heart was in it.  There’s nothing artistic in any single shot in the film, and perhaps this points up what we’ve always known about the director: he’s more in touch with his actors and what they say (and his films are all about people talking, rarely taking action), than he is with camerawork or visual flair.  This isn’t a bad thing, necessarily, when what you have to say has some occasional importance.  But Smith’s films have always favored grade-school level dirty jokes.  The bathroom and bedroom humor in the film was probably what drew him to the script, and again, this isn’t a bad thing.  Much of what’s funny about Cop Out is hilariously so, but ultimately there just isn’t much more to recommend.